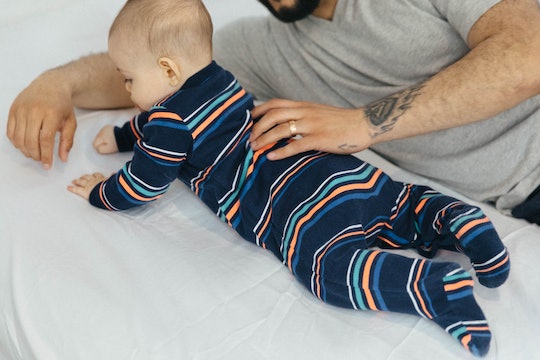 We all know how awesome a massage can feel on sore and stressed muscles, and some schools of thought believe massage helps with certain ailments and issues in adult’s bodies naturally. But what about babies? By now, I’m sure you’ve noticed that a lot of babies like to “break wind” and do it at quite inopportune times — like when company is over. (And you’re hoping they know it’s the baby and not you.) But sometimes babies get really uncomfortable from gas and cry, and nobody wants that. So how do you massage your baby to relieve gas? With these proven techniques, you can help relieve your little one's gassiness and get some one-on-one cuddle time and physical contact with your baby. It’s a win-win.

Pediatrician Dr. Jarret Patton tells Romper that in addition to massage being a wonderful and natural way to relieve gas pain in infants, there are also numerous other benefits to infant massage. “Actual benefits may vary, however, the most common way to perform the technique is to lay your baby on her back and rotate the legs in a bicycling motion. A gentle massage on the tummy may help as well. Finally you can try a little supervised time on the tummy. This may help relieve the gas and will have the additional benefit of strengthening the upper body muscles,” he explains in an email interview.

I asked Patton if massage can help other ailments your baby may have, and in his opinion, “Massage in and of itself can be soothing to a baby as she tends to like the human touch. However, we typically don't use massage to treat specific common ailments in infants.”

According to What To Expect, in a study published in Pediatrics, massage can help with premature babies’ immunity. The doctors worked with 58 preemies and gave them massages five days a week (at a maximum of four weeks) until they were discharged from the hospital. “Although the researchers found no difference in the absolute number of immune cells, they found that natural killer immune cells were more active in babies who received massage therapy. In addition, infants in the massage group gained weight faster and were heavier at the time of hospital discharge than babies in the control group,” noted What To Expect.

But not all babies are alike, so why do some babies have more gas than others? Patton says gas is a “byproduct of digestion or swallowing of air, and it can be a combination of the two that can make babies have different levels of gas production.” He said some moms can tell that it’s certain foods they eat that cause the baby to have gas after breastfeeding, or even the type of formula or other foods that your baby eats that can cause gas. “For bottle fed infants, a change in the bottle or nipple type could help,” Patton suggests.

As far as prevention, it looks like it’s a pretty common thing among babies and there’s “no real way” to prevent gas during infancy, according to Patton. However, “frequent burping during feeds can help with the amount of air that stays in the digestive tract," he says.

So enjoy this one-on-one time with your baby and enjoy the closeness and bond you form with the skin-to-skin contact. Just hold your nose after doing the massage, because it apparently works when relieving gassiness in your infant’s belly. But a little stinkiness is definitely worth it, and let’s face it — you’ve already probably dealt with way grosser stuff. Happy baby means happy mama.