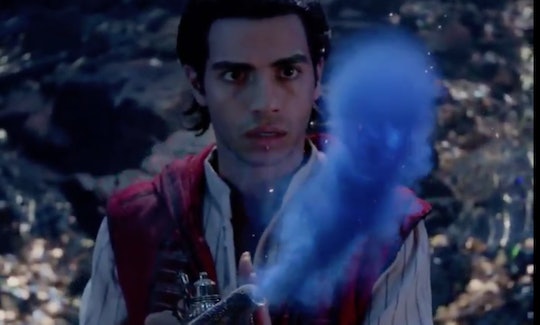 Calling all street rats, riff-raffs, and anyone that has ever been madly in love with a princess who seems to be forever out of your reach! Rubbing those lamps must've paid off, because the one thing you were willing to waste all three of your magic wishes on is finally happening: After 27 long years of waiting, the live-action Aladdin trailer finally dropped during the 2019 Grammy Awards and it looked phenomenal.

The biggest change in the official trailer that the teasers have so far been without was the addition of Genie in his full, blue form. Fans already knew that Will Smith was sliding into the formerly animated role made famous by Robin Williams, but nothing really prepared us for Smith in full blue. It was *interesting*. I had high hopes for Smith being the genie in the first ever official live action version of Aladdin.

I'm not saying I didn't love that he was finally unveiled in an official trailer, but it was a little different than what some fans might have expected. Before now, all fans have had to go on was the memory of the larger than life cartoon version of Genie, so seeing Smith was a shock. But we'll get over it because this is the only Genie we're getting and Smith usually kills it in his movie roles.

Smith was previously revealed as the live action version of the genie, but without any CGI or blue makeup. He was basically a genie version of the Fresh Prince, 20 years later. But now that the full Aladdin trailer has shown fans what Genie will look like, come May 24, at least it won't be as shocking. Because it was still a surprise to see him at the end of the trailer.

The Aladdin trailer during the Grammys also gave fans a peek at Jafar and a closer look at the title character himself. There was even a shot of Jasmine looking nervous, likely about the idea of being forced into marriage with Jafar. And if he's as evil as the animated version, she has every right to dread that potential marriage. Just in case you were worried that the live action Aladdin reboot would cheat you out of that classic Disney music, it looks like there will be plenty of musical numbers throughout the movie. But I'm not gonna lie — the focus is currently on blue Genie in the Aladdin reboot and I can't really blame fans for that.

I still fully support Smith as the new Genie, but the image of him as the overly muscular partly CGI blue mystical creature is the stuff of nightmares.

If nothing else, at least the full Aladdin trailer got the surprise of Smith as Genie out of the way and when we all see the reboot in May, it won't as shocking. Because say what you will about him as Genie, but everyone who was already an Aladdin fan will still probably see the reboot when it hit theaters.