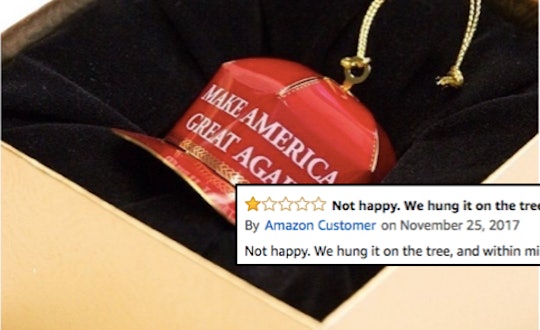 It's been nearly a year into Donald Trump's presidency and Americans are tired. There's the ongoing special counsel investigation into whether the Trump campaign colluded with Russia during the election, the president's unabashed support for white supremacists, the attacks on trans people, Republicans' ongoing crusade to deliver major tax cuts to the rich, and so much more. But that doesn't mean that anti-Trumpers are going to miss a perfectly good chance to drag the Republican for his time in office so far. Nope, they really came together online to deal with it all through humor recently, as evidenced by the Amazon reviews on this Trump Christmas ornament. Because when you're a president with as many professional and moral foibles as Trump, you really can't expect anything else when you try to peddle your #merch to the masses.

The "Trump Make America Great Again Red Cap Collectible Ornament" debuted post-election last year on the campaign's website, retailing for an outrageous $149, according to The Week. And, now coming with a nearly $95 price tag, the Amazon reviewers were largely unimpressed with its 24-karat gold finish, choosing instead to focus on the shortcomings of the campaign — and, you know, everything that "MAGA" really stands for. Whelp, now, Trump critics have nearly a full year of post-inauguration frustrations to vent. The result, friends, is deliciously merciless.

Commenter "Daniel Thomas Flood," for example, referenced Trump's recorded admission that he makes a habit of allegedly groping women without their consent:

For some reason after adorning our Christmas tree with this as a joke, the tree took on a life of it's [sic] own and kept trying to grope the cat. This ornament is a bad hombre.

Another commenter apparently took on the seemingly endless sexual assault allegations against the president, as well as more recent accusations that GOP Senate candidate Roy Moore allegedly made sexual advances on teenage girls when he was in his 30s, according to The Washington Post, including a 14-year-old:

Not happy. We hung it on the tree, and within minutes it worked its way up the branches and assaulted the 14-year-old angel on the top.

"AJB" seemed as though he or she may not exactly be talking about the ornament at all:

Received as a gift. Put it on the tree and immediately became racist, sexist, and stupid. Can't find the colored ornaments. 1 star. Trust me.

There is the allusion to Trump's refusal to welcome Middle Eastern refugees into the country courtesy of "Erika Meija:"

This item has caused chaos! I keep trying to set up my Nativity Scene, but then the hat starts yelling something about not allowing Middle Eastern Refugees near his tree. Then the hat insists that the banning of Refugees is the only way to Make Christmas Great Again.

Needless to say, the Amazon review section for the "Trump Make America Great Again Red Cap Collectible Ornament" is replete with one-star reviews. And, again, needless to say that it does not seem as though the vast majority of these reviewers actually purchased the ornament. Honestly, it's obvious that they want the "MAGA" ornament in their homes just about as much as they actually want Trump in the Oval Office. As "virginia o" wrote:

My conservative neighbors gave this to us to hang on our tree. Every time my pussycat walks by the danged thing jumps on her tail. The whole family has voted that it has to go but it's still hanging around. Help us!

But, right now, most signs indicate that the American people will have to deal with Trump for the next three years at least. Which means, despite the many troubling moments those years undoubtedly have in store, the MAGA hat roasting is likely to become a beloved holiday tradition.