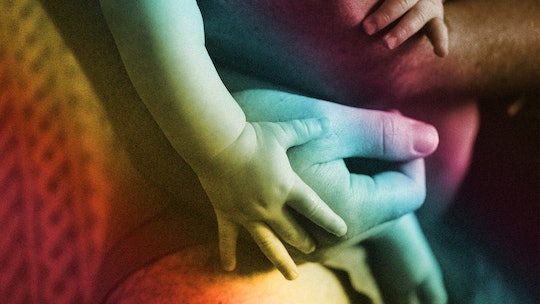 The Anxiety Of Being The Non-Bio Parent

It was decided in a practical manner that my wife would carry our first child, as she was older and seemed keener on the idea. She quickly conceived through IUI, and as the months progressed, I began worrying about where I fit into this baby’s life, as he wasn’t biologically mine and I wasn’t carrying him. I developed belly envy — a lesbian-specific Freudian self-diagnosis similar to penis envy — yearning for a physical body that could never be mine. Watching my wife partake in what appeared to be the beginning stages of caretaking and bonding left me feeling useless. I wanted to experience the mystical sensation of my son moving inside my body. My wife and I managed and struggled through my feelings, and just when I felt like I was coming to terms with the pregnancy, he arrived.

With a swift cut of the umbilical cord, I was a mother. We were mothers. I knew I loved him right away, but I wasn’t sure how he felt about me. I worried he couldn’t recognize my smell like he could with his other mom, the one whom he had lived inside. My wife was inundated with the things you say about a brand-new baby: “He looks just like you, he looks just like your dad, I see so much of your great grandpa in him.” Examining this squishy-faced, steely-eyed baby with a mop of curly hair, I wasn’t always sure these statements were true, and they grated on my nerves, alternately enraging me on days when I caught a glimpse of him and recognized the truth in what others said. He, my wife, and my father-in-law all have unmistakable matching cleft chins. His hair does look like my wife’s hair did when she was an infant. And it is possible his head shape matches that of his grandfather.

All of the external noise mixed with stress of keeping alive a newborn let loose a feral side of myself I never knew existed — an urge to swallow him whole and keep him inside of myself, just so he would know he too belonged to me, an impulse to take him and my wife far away. It worried me that he might catch a whiff of my wife’s family and the aromatic DNA signals would tell him that he belonged to them, leaving me out. Seeing other people hold him would send a primal compulsion through me to rip him out of their arms. Immediately after this thought, a deep sadness settled into my chest. I love my extended family. Since Day 1, they have loved me like their own. Marriage and baby aside, my extended family is my family. It was confusing, the urge to create distance from them, but when we were all together, I felt left out, the one without matching blood. I hated that he had cousins, great uncles, and aunts that shared something with him that I never would. At times, it felt like a gaping hole of grief I’d never be able to fill.

He must know me, I thought, despite not having matching DNA or an identical chin cleft.

When it was just the three of us, I felt more at ease. I felt deeply connected to him, but the back of my brain itched with worries about him feeling more attached to my wife, as she had carried him for the past 10 months and brought him into the world. It’s difficult to tell with newborns as they scream, make sweet sounds, and take bottles from anyone who’ll offer. You are always waiting for a definitive sign. I was in the fog of early parenthood one day or night, sitting on the couch holding his wailing body and trying to ready his bottle, when he settled and sucked away calmly looking at me with doe eyes, as if he hadn’t just been howling in my face for 10 straight minutes. Outside of our 10th-floor apartment window, the sky lit up with lightning in bright, mile-wide streaks. It was silent and there was no rain. Another morning, I sat with him completing a similar routine when three red balloons floated across the morning sky. At the time it all felt important. I liked knowing we shared these moments and realizing we were creating something of our very own.

As an infant, my son was fickle and a screamer, especially between the hours of 6 to 9 p.m. Our world would appear fine and then the scream would escape his small lungs, filling the apartment for 45 minutes at a time. I was best at calming him during these upheavals. Using the self-patented combination of holding him tightly against my chest as I walked across the apartment doing leg lunges and then circled him in a Lion King-like motion, he would eventually calm or at least scream at a lower octave. Everyone noticed I was good with him when he became otherwise inconsolable, and it felt satisfying. He must know me, I thought, despite not having matching DNA or an identical chin cleft. Another magical phenomenon occurred; I found myself springing awake from a deep sleep and 30 seconds later, as if I had conjured him up myself, the baby would begin to cry, ready to eat. It felt reassuring to know him and be connected to him on a subconscious level. During these moments I began to understand what current science was reporting, that the brain scans of parents mapped themselves to their child as they bonded, whether or not they were biologically related. As the months passed, the baby’s attachment became more obvious and my mind rattled with fewer worried thoughts about him.

When my wife holds him, their physical similarities are illuminated and it now makes my insides swell, as I can’t imagine him being luckier to look like anyone else. The fear of being left out dims day by day when he lights up to see me, reaches for me, and frankly has begun stalking me. Right before his first birthday, my son became overtly obsessed with us, screeching if we leave the room for one second, walking right into our laps, and doing anything his body is capable of to make us laugh or smile at him. This new obsessive love makes me more easily appreciate him having the matching face and frame of his grandfather. Thinking about his DNA being the same as his extended family now feels easier too. I know much of myself and my own family will be nurtured into him. He’ll be balanced, not because of the molecules that run through him, but because he has deep relationships with people who love him.

My thoughts and body have changed since his arrival; my brain is more occupied, newly formed bags reside under my eyes, and I recently found my first gray hair. Every day it becomes more clear, bonding is not based in blood, but in every action and interaction my son and I exchange.

More Like This
The Morning Rush Is Parenting At Its Most Essential
Sex And Mom Guilt: When I Date Someone New, Am I Cheating On My Kids?
If Serena Williams Can’t Have It All, Who Can?
9 Reasons Why Some Women Can't Breastfeed