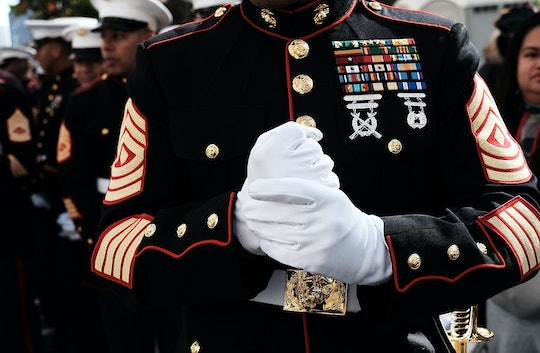 The Army Is Allowing People With Mental Illness History To Join, & Here's Why It's So Problematic

Mental health issues are already a common battle among the general population, so it's not even sort of surprising that mental illness is also a big problem among United States veterans returning from duty. The grueling reality of active service in places like Afghanistan and Iraq has meant that many have been left to struggle with issues like post-traumatic stress disorder and depression when they come home, and in many cases, they've also been left without adequate mental health support to deal with it. And now the Army is allowing recruits with histories of mental illness to join, according to USA Today, and it's a decision that many are finding unsettling.

The practice of allowing individuals with mental health issues to serve in the military isn't actually new: prior to 2009, new recruits could apply for waivers to join the military if their health histories included mental health problems, and if they were deemed fit to serve, they would be allowed to. But that practice was banned in 2009 following an increase in the rate of suicide among troops, according to USA Today, signaling that perhaps sending individuals with pre-existing mental health risk factors might not be a good idea. (Though this assumptions leaves out the fact that mental health support systems in the military are incredibly lacking. Not everyone who is mentally ill has a higher propensity for suicide.) In an unannounced move back in August, however, that ban was reportedly lifted, allowing people with a history of "self-mutilation, bipolar disorder, depression and drug and alcohol abuse" the opportunity to apply for waivers in order to serve in the Army.

Given the fact that mental illness stigma is still a major factor in preventing people from recognizing that they may need help — and certainly in preventing them from actually getting help — there is some value in lifting a blanket policy that prevents anyone who has ever had a mental health issue from serving. After all, "mental illness" is an umbrella term, with all sorts of disorders and levels of severity cobbled beneath it, and no one should be automatically written off as unfit because of it. A general ban can also have the unintended effect of actually preventing someone who needs help from getting it: someone who has struggled and then received treatment for their issues through medication, psychotherapy, or some other recognized intervention would likely be much better equipped to serve than someone with a clean medical record, who has been keeping their issues to themselves for fear of backlash or judgment (or, uh, disqualification from the military).

The good news is that's something that the Army seems to be aware of: in a statement, Army spokesperson Lt. Col. Randy Taylor told USA Today that the Army now has better access to "medical records and other data," allowing for more effective screening of waiver applicants. As Taylor explained,

Army officials can now consider applicants as a whole person, allowing a series of Army leaders and medical professionals to review the case fully to assess the applicant’s physical limitations or medical conditions and their possible impact upon the applicant's ability to complete training and finish an Army career.

That sounds encouraging, to be sure, but there also appears to be another driving force in the decision that's raising concerns. According to USA Today, the Army has a target of recruiting 80,000 new soldiers before September 2018 — a lofty goal, given that in the previous year, recruits were reportedly accepted for service despite lower test scores (the outlet noted that the Army also "offered out hundreds of millions of dollars in bonuses" to meet their 69,000 recruitment target). In other words, lifting the ban on mental illness will make it easier to find more individuals interested in joining the military, but there could be consequences.

Already, the military seems to be falling behind when it comes to addressing its current mental health problem. According to a RAND study, nearly one-third of service members surveyed after returning from Iraq or Afghanistan met the criteria for either a mental health condition, like PTSD or depression, or have experienced a traumatic brain injury (nearly 620,000 veterans in total). Yet only about half of them will actually access treatment services — and even then, only about half of those will receive adequate care. And it has a devastating impact: according to the National Veterans Foundation, at least 20 veterans commit suicide each day.

There are other worrisome statistics too: according to the National Veterans Foundation, about 25 percent of returning Iraq and Afghanistan veterans showed signs of substance abuse disorder, and even without qualifying as having a clinical disorder, many also struggle with intense isolation and loneliness. And as NPR noted in 2016, veterans with PTSD "are three times more likely to be violent" after their return. Department of Veterans Affairs researcher Dr. Casey Taft told NPR:

When one is exposed to war-zone trauma and combat trauma, they are going to be more likely to assume the worst and assume people are trying to do harm to them — and more likely to respond to that with aggressions.

The concern then, is that many of these struggling vets — or at least those who joined the Army in the last eight years — would have presumably cleared their psychological evaluation when they joined, showing just how much of an effect active duty can have even on those who didn't have a history of mental health risk factors prior to deployment. If the Army is really able to ensure that only applicants who are truly low-risk are eligible to serve, then perhaps the policy will be a good move toward greater inclusivity. But given how many veterans are already lacking access to comprehensive mental health care, it seems like a risky decision, even under the most optimistic of circumstances.

After the recent mass shooting at a church in Sutherland Springs, Texas, details that emerged about the gunman revealed that he had been a member of the Air Force, but had been "discharged for bad conduct," and was described as "suffering from mental disorders," according to The Hill. He was also allegedly charged in a military court with assaulting his wife and baby stepson — something which should have prohibited him from buying or owning firearms. Yet the Air Force reportedly did not submit his criminal history to the federal background check system.

Following the shooting, President Donald Trump claimed that the shooting wasn't "a guns situation," but instead representative of a widespread mental health problem. In response, the House recently passed legislation to provide mental health care for veterans who received an other-than-honorable discharge from the military, according to The Hill.

The Sutherland Springs example is obviously an extreme one, and not at all representative of the day-to-day reality of the mental health struggle of most returning veterans. Yet for all the talk about improving mental health services for veterans — something that is very much needed — allowing those with mental illness backgrounds to serve so that there is a wider pool of recruits could be dangerous when it means they could be even more likely to suffer from the debilitating effects of military service. Increased psychological screening and mental health support is a really valuable move, but only if it actually helps prevent vulnerable individuals from joining — and helps those who have already joined to heal.