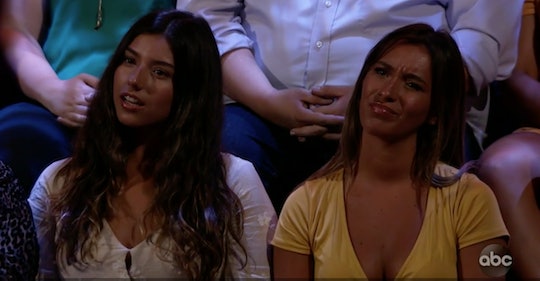 The Audience Reactions To Luke P. On "Men Tell All" Were Chilling

For the first time in recent memory, a Bachelorette contestant came out to the hot seat during a "Men Tell All" special without a single peep from the audience. They didn't even boo Luke P., preferring instead to give him the stone cold silent treatment. But the audience reactions on "Men Tell All" when cameras cut to their faces were chilling.

The "Men Tell All" special actually opened with the conclusion of Hannah's rose ceremony in Greece, which Luke crashed after being eliminated, absolutely refusing to take no for an answer. In an ultimate power move, Hannah physically lifted up the podium with her remaining roses and moved it past Luke, putting him squarely in her proverbial rearview. But he still wouldn't leave until she'd said multiple times that she didn't have feelings for him anymore. As you can imagine, things only went downhill from there.

Luke was the first to come out during "Men Tell All," and production apparently thought it was going to be so contentious that they sequestered the other guys backstage for his time in the hot seat. Things started off civilly enough. But almost every time Chris brought up a thorny subject, Luke would take extremely pregnant pauses trying to choose his words, leaving the audience in an awkward silence. Production chose not to edit out those pauses, so, naturally, that left a lot of time to pan over the audience and their excruciating facial expressions.

Their awkward, confused, questioning, furious, and beyond stunned faces said it all. There are honestly a million gif-able moments. There was a lot of eye-rolling, for one, a lot of head-shaking, and a lot of putting their faces into their hands in complete exhaustion. And when Chris asked Luke P. if he felt like he made any mistakes, Luke replied that he wouldn't change a thing, which almost made Chris himself fall out of his chair.

He quickly backtracked after the commercial break, which was a prime example Luke's signature move. In the end, Luke left the poor audience feeling just as yanked around as he did Hannah. He even said that he felt like he was on a "rescue mission" for her, which prompted lots of horrified expressions.

Eventually, the other guys were brought out while Luke sat in the hot seat and they made some equally baffled faces. It's pretty clear that absolutely everyone within earshot of the guy felt as if they were becoming unhinged trying to make sense of what he said. But reconciling Luke's many, many contradictions is an impossible task.

Of course, there were some lighter moments in the "Men Tell All" special, too. For starters, John Paul Jones got a moment to continue charming the pants off Bachelor Nation in his run up to Bachelor in Paradise, and it culminated in — what else! — him throwing chicken nuggets into the audience. And Mike got a very warm welcome from the crowd, proving that his campaign for the next Bachelor is a strong one. But Luke was clearly the star of "Men Tell All" — and not in a good way.