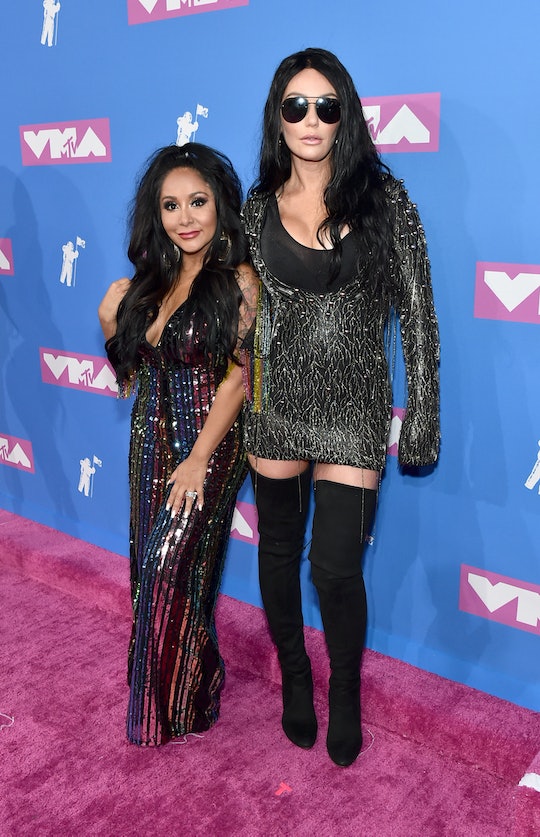 The cast of MTV's Jersey Shore are always reuniting in some way or another, whether it's on their show, Jersey Shore Family Vacation, or just hanging out and spending some quality time together. And it's even better that the babies of Jersey Shore reunited, because those little meatballs are so adorable.

The cast members of Jersey Shore probably have a lot in common with their little ones — they're not afraid to have some fun, they can be a little reckless from time to time, and they never miss the opportunity to reunite with one another when the time strikes. So, it makes sense that their kids were the spitting image of their parents over the weekend at Nicole "Snooki" Polizzi's baby "sprinkle" on Saturday.

In the photo, posted to Polizzi's Instagram account, a handful of the Jersey Shore babies can be seen looking chummy on a couch together. Deena Cortese's infant son, CJ, rests lovingly in Jenni Farley's (JWoww) 4-year-old daughter Meilani's arms. Snooki's two children, son 6-year-old Lorenzo, and 4-year-old daughter, Giovanna, look so happy to be hanging out with their crew.

There is so much to be said about this adorable photo. The kids really do look exactly like their parents — and they should be a little afraid when these little meatballs get older. If they're anything like their parents, then they will definitely be a handful, to say the least.

At least, that's what Polizzi's followers think. People took to her Instagram comments to leave some hilarious messages about the photo. Some are even begging for them to get the kids their own show.

"Ready for GTL... games, toys, and laundry (don't need to change that one)," one commenter wrote.

"That should be a show I would totally watch it 24/7," one commenter stated. "They are all so cute."

There's a reason why all of the Jersey Shore babies were together this weekend (and it isn't because the kids are close) — everyone was gathered to celebrate Snooki and her third pregnancy, according to Us Weekly.

As previous stated, a baby "sprinkle" (a smaller, more toned down version of a baby shower) was held in Polizzi's honor this weekend, according to People. At the sprinkle, guests feasted on cheese platters, and brought over some serious gifts for her son, whom she is naming Lorenzo, according to Us Weekly.

Let's just say they'll need to retake this super adorable photo of the Jersey Shore 2.0 cast very soon. Polizzi's due date is fast approaching, and her son will be here before fans know it. And her kids sound like they're ready to add one more little meatball in to the mix. Polizzi told Us Weekly in January that her children "can't wait for their little brother." How sweet!

Hopefully once Snooki's son arrives, all of the Jersey Shore babies will come together to get another photo like the one taken on Saturday. At this point, their reunions are just as anticipated as the reunions their parents partake in.