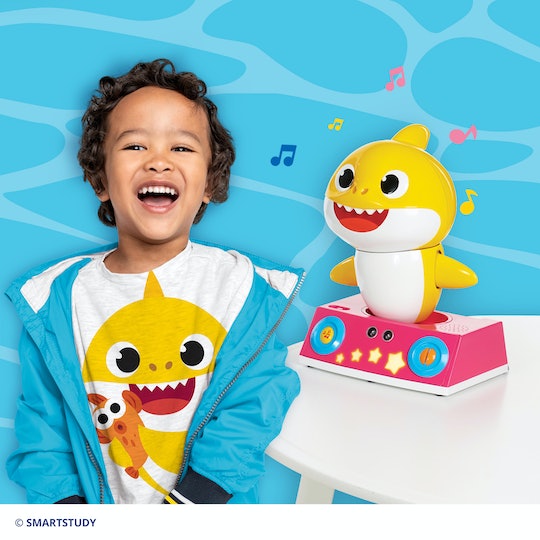 This Baby Shark DJ Is About To Drop Some Serious Beats (& Dance Moves), You Guys

There has been some funny speculation over the impact "Baby Shark" will have on our children as they grow, and the image of a bunch of 20-somethings losing it over the anthem being played in a club is pretty intense. But now you can spin the tunes yourself with this Baby Shark Dancing DJ toy for your kids.

The Pinkfong Baby Shark Dancing DJ toy comes from WowWee, and it will bring a dance floor straight to your kids. Not only will the DJ play the OG "Baby Shark" song, but also five other remixes for your kids to dance to. And the really cool thing is that there's a sensor in the shark that recognizes your child dancing in front of them, so the little yellow guy will dance along, too. You can also play two games — Baby Shark Dance Off and Freeze Dance — with the DJ. The first one will have the shark dance and then pause as your child dances in a "battle" of sorts (Jets versus Sharks obviously), while the freeze game has the shark yell "freeze" to your kiddo in the middle of their dancing so they can stop in a pose before shimmying again. Bonus: if your kid doesn't listen to the word "freeze" and keeps dancing, the sensor will recognize this and your kid won't get the game points. So then you can laugh at how your child listens to literally no one, not even a yellow plastic Baby Shark.

The Baby Shark Dancing DJ toy is for ages 2 and up, and was featured at the New York Toy Fair this year. It will be available for purchase in August 2020 for $40. If your kid is obsessed with Baby Shark, do do do do do do do yourself a favor and be sure to keep your eyes peeled for the official release of the DJ toy. Spin that crazy beat, Baby Shark.