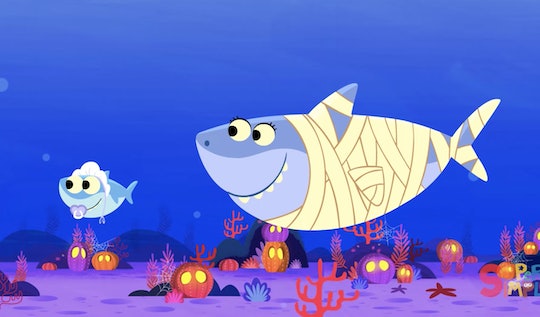 Baby Shark is the gift that keeps on giving. Everyone's probably heard the original song a few million times by now (and if you've got kids, it probably feels like a few billion times). With autumn approaching, it seems like a good time to remind you that there's a "Baby Shark Halloween" tune, too.

If you haven't heard it yet, just wait. Your toddler is sure to be blasting it on repeat on YouTube very soon. Instead of that familiar "do do do do do do do," for Halloween, there's a "boo boo boo boo boo boo boo," which is one of those things that's so obvious yet so clever that you'll wonder why you didn't write the song yourself. The video is super cute, with the shark family adorable donning their Halloween costumes. Baby Shark seems to be dressed up as an actual baby, complete with a bonnet and pacifier. The other sharks are dressed up as a mummy, ghost, pirate, cowboy, and princess. And since this is a Halloween video we're talking about, there's even a cute twist ending involving an extra spooky shark.

The "Baby Shark Halloween" song isn't by Pinkfong, the company behind the mega viral "Baby Shark" dance remix that's spawned a whole line of products like books, clothes, toys, and even an upcoming TV show. Instead, it's produced by the YouTube channel Super Simple Songs. The company's website notes that it began in Tokyo, Japan, and was dreamt up by a bunch of teachers who needed easy, basic songs to use as teaching tools. They started creating their own music with an easy pace and simple lyrics for kids to follow. That formula has led to mega success: the "Baby Shark Halloween" video alone has gotten more than 76 million views since it was released two years ago.

One speech therapist told Romper.com last year that Super Simple songs really are great for promoting speech development in young kids. Laura Brown said that she highly recommended the videos. "I have used them in my special day programs, and have personally used them with my [3-year-old] son to encourage his language development. They are my [go-to] videos when I let him have screen time," she explained at the time. Brown said that parents should make it a point to watch together, and ask their children lots of questions about what they're seeing to engage them and make the videos even more effective. So even if the repetitiveness irks you to no end, just remember: it's so good for your little one, and can really benefit them.

Assuming you've got a fairly high tolerance for listening to the same song over and over again without wanting to stuff several pairs of earplugs in your ears, then I have one more piece of good news to share with you. If "Baby Shark Halloween" is your kiddo's jam this fall, just wait until winter — there's also a "Santa Shark" song to listen to non-stop once the holiday season draws near.

More Like This
From Captions To Gifts, These Are All The Kindergarten Graduation Ideas You Need
34 Instagram Captions Perfect For Preschool Graduation Photos
These 24 Star Wars Quotes About Love Will Make You Feel All The Feels
Fun Ways To Celebrate National School Nurse Day