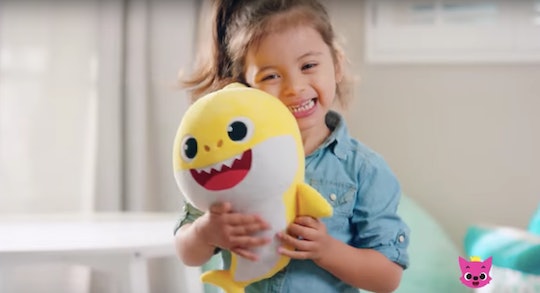 That Baby Shark Singing Toy Is Already Sold Out On Amazon, So Let The Hunt Begin

It really wouldn't be the holiday season if there wasn't a toy out there that everyone desperately wanted. A singular specimen that was the "It" toy of the year, although I'm never quite completely sure how this toy is chosen. Is it sort of like the Oscars, where one toy campaigns hard to be the winner of the season and the other toys just hang out on the shelves, hoping someone will love them. This year is no different, although the "It" toy was announced a bit later and was gone in a flash. That's right, folks, that super adorable Baby Shark singing toy is already sold out at Amazon, according to USA Today, so I guess parents will be spending the next few weeks scouring the internet to find one.

"Baby Shark" is, of course, the unbelievably viral ear worm of a ditty brought to you by Pink Fong along with a special dance and video on YouTube that has been watched more than 2 billion times. WowWee Toys, the makers of Fingerlings — last year's must-have toy of the holiday season — is also behind the success of the "Baby Shark" singing plush toys. Well done again, WowWee, because those toys are so popular, they sold out in under three days on Amazon, as USA Today reported.

The singing plush toys, which featured the Baby Shark as well as the less intriguing Mommy Shark and Daddy Shark, were originally meant to retail for around $17 per item on Amazon. But by Tuesday morning, USA Today reported that some independent sellers on the site were asking upwards of $150 for a Baby Shark and $50 to $70 for Mommy and Daddy Sharks. And by Wednesday, even these marked-up versions were nowhere to be found.

Some parents on Twitter felt a, sort of, guilty relief that they were off the hook with Baby Shark.

Some expressed a bit of outrage at the marked-up prices from the independent sellers.

Some managed to pick up their Baby Shark singing plush toys on time, and for the regular price and are kicking themselves for not buying more.

So for those parents who would still love to get their kid some sort of Baby Shark toy for Christmas, it seems you might still be (sort of) in luck. There are still some small, stackable Baby Shark, Mommy Shark, and Daddy Shark cubes available on Amazon for around $45 and up from independent sellers. Which is pretty steep considering they were originally selling for $7 per item.

The reality is this, your kid would probably love a Baby Shark singing plush toy for Christmas. But next year, that toy will most likely be something entirely different or go the way of Fingerlings and maybe even Tickle-Me-Elmo again. So if you can't get one this year, don't sweat it. You can just put "Baby Shark" on YouTube on repeat and slip slowly into madness.

That can be your Christmas present to your little one.

More Like This
Harry Styles Running To Hug His 78-Year-Old Super Fan At The Grammys Will Make Your Day
Parents Have Thoughts After Court Orders Nursing Mom To Use Bottle In Custody Dispute
6-Year-Old Boy Has Zero Regrets After Ordering $1,000 Worth Of Food On Grubhub
Eagles Coach Nick Sirianni Brought His Kids To A Press Conference & It Was Hilarious
What Parents Are Talking About — Delivered Straight To Your Inbox