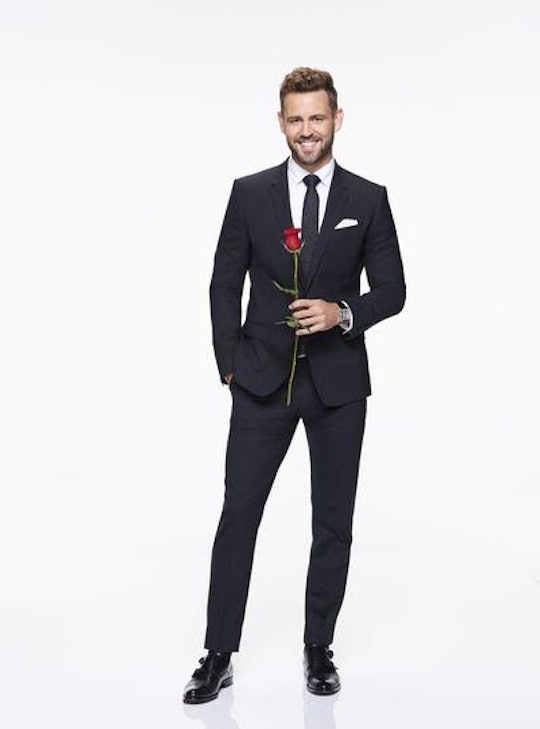 Beard Hunk Skit On 'SNL' Was Way Too Accurate

Everyone knows that The Bachelor is a little bit ridiculous (and totally addictive), but Saturday Night Live's "Beard Hunk" sketch perfectly parodies The Bachelor and highlights why it's just so out of control. The sketch featured a Nick Viall (this season's current Bachelor) as The Beard Hunk, and showed him meeting with various women in evening gowns on a bench as they introduce themselves. Just like in real life.

One woman, played by Vanessa Bayer, says, "my name is like whatever," and The Beard Hunk just responds, as he does to everything else, "I like that." Another woman, played by Felicity Jones, just sort of stares into the Hunk's eyes and tells him how "safe" she feels. This is a common theme.

Another woman, played by Aidy Bryant, continues to offer sexual favors to the hunk, while others continually interrupt each other. In case you missed it, on this past week of The Bachelor, the women actually get in a fight about how appropriate it is to interrupt watch other when they get "alone time." So the sketch was totally on point in pointing out actual plot points and the absurdities of the show in general — like women telling the man that she "feels safe" and needs to point out how attractive she is to win.

Fans on Twitter were all over the sketch, with one user writing, "This about sums it up [way] too accurately , but yes it's my guilty pleasure Monday nights," which was the general sentiment.

Just in case you think the sketch show is picking on poor Nick Viall and the contestants this time around, remember that The Bachelor spoofs are sort of a tradition. In the past, the show has done The Farm Hunk and The Bland Man.

This Beard Hunk sketch followed the same exact formula of the other parodies. Last year, Taran Killam played "Dan," who was from "Chicago or Denver or something" getting to know his dates. The cycle of women was super similar to the Beard Hunk (and the Farm Hunk before him). One girl described a hometown date by saying, “I loved going to your old high school and watching you cry." And of course, every thirty seconds — on the dot — another girl tried to sneak in "steal him for a sec."

Sure, mocking The Bachelor is not all that hard but SNL has a long tradition of making sure the world knows just how silly the competition can be. The Beard Hunk was a much added addition to The Bachelor spoof collection. Sorry, ladies.