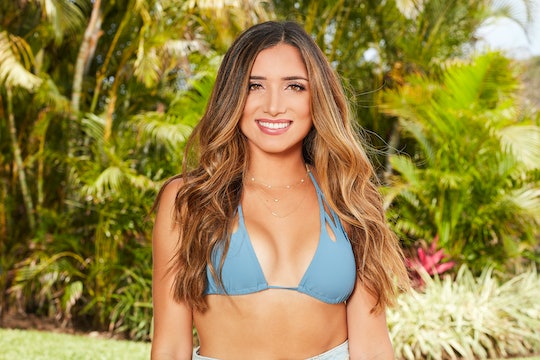 Clay Harbor, from Becca Kufrin's season of The Bachelorette, has already been referred to as the "teddy bear" of Paradise by his fellow castmates. But when Christian, who not-so-memorably went home on night one of Becca's season, swooped into Paradise to play Mr. Steal Your Girl with Nicole, Clay's inner beast came out. The Bachelor in Paradise fight came to fisticuffs, which may seem out of character for Clay. But the day before, Nicole had encouraged him to be more assertive with her, especially since she seemed to respond well to Christian's aggressive flirting style.

"It's like the matador with the bull," Clay ominously remarked to Jordan as Christian kept looking over at him during the cocktail party before the rose ceremony. Christian had planned an elaborate mini-date for Nicole, but when it came time for Clay to move in and steal her back, he was actually a polite gentleman about it. Clay backed down instead of causing a scene when Christian got aggressive, but plot twist: Jordan actually went after him, on behalf of his friend.

Jordan had been egging Clay on all night, helpfully reminding him that Nicole was interested in men who would fight for her — literally. But when Clay went to steal her, Christian dug his heels in and refused to let Nicole go. For her part, Nicole didn't really seem to want her mini-date to end, and it was actually pretty commendable on Clay's part to take the hint and walk away.

"Just because I don't want Nicole to be in a tough situation, I'm doing this for you. I'm not doing this for Christian," Clay said as he backed off. "Have fun...but not too much."

Surprisingly, Jordan and Wills were the two people most devastated by the flame-out and Jordan felt compelled to do something about it. (If you'll recall, Jordan and Christian had a little tiff on Becca's "Men Tell All" special in which Jordan, to be perfectly honest, got the better burns in.)

"Nobody treats my buddy like that," Jordan huffed, begging Clay to let him go ruin the piñata Christian had set up. Clay assured him that he didn't need bro backup in this particular situation, but Jordan couldn't help himself. "I apologize that you got turned away by Christian but I have to go fix this for us now," he announced as he walked over to Nicole's mini-date.

It's honestly difficult to tell who started the physical altercation. Jordan went over to rip down Christian's piñata, and Christian tried to stop him, resulting in a shoving match which mostly just seemed like they lost their balance and tumbled over. But then Jordan picked Christian up and threw him into the sand in a move that looked straight out of GLOW. Promos for next week's episode tease that the scuffle continued down the beach, with producers swarming Christian to pin him down. Needless to say, it looks like Nicole found her "assertive" man this season. (Ironically, she and Jordan went out on a date, too.) Fans will have to wait for the thrilling conclusion to this brawl, but my guess is, someone is getting banned from the franchise.