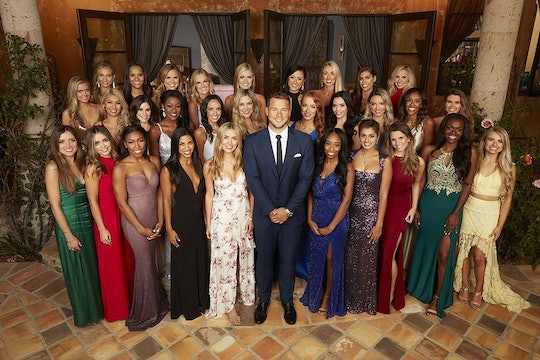 Hang on to your hats #BachelorNation, because the Season 23 Bachelor contestants have officially been revealed. Making matters even more exciting? ABC also released the first cast photo of bachelor Colton Underwood posing alongside his group of 30 potential partners.

Arguably the most thrilling part about The Bachelor/Bachelorette franchises is learning about the new season's contestants. It's fun to read each cast member's likes and dislikes, learn about where they're from, and to dive deep into their reasoning for entering the wild world of reality TV.

The list of cast members also provides some insight into how the season will turn out. Although the first cast bios aren't especially revealing, they do provide enough information for fans to get an idea of compatible backgrounds.

Underwood, for instance, is an ex-football player living in Colorado who now runs a charity. He's also a virgin (ABC really wants viewers to remember this fact), and he's very close with his family.

If I had to place a bet, I'm guessing Underwood will end up with someone who hails from a smaller town (I can't see him in a big city, but who knows). Based on this prediction, you might be able to eliminate a handful of contestants who live in Los Angeles and New York City.

As for the contestants' jobs? Well, some of the ladies' occupations are a bit interesting. See for yourself below.

Alex B., 29, a dog rescuer from Vancouver, British Columbia, Canada

Courtney, 23, a caterer from Atlanta, Georgia

Erika, 25, a recruiter from Encinitas, California

Laura, 26, an accountant from Dallas, Texas

Onyeka, 24, an IT risk consultant from Dallas, Texas

As you've probably noticed, Alex D. is a self-proclaimed "sloth," while Erin fancies herself to be "Cinderella." Although I'm not sure what any of this means, I'm curious to learn more about these two.

But wait — that's not all. ABC also released a teaser featuring the contestants, one of which (I'm guessing Alex D.) is dressed up in a sloth costume. Welcome to #BachelorNation, folks.

"Oh, he’s in trouble. The ladies of #TheBachelor BRING IT this season," the Twitter promo reads. "(Sloth costumes, tequila, and all.)"

Of course, it's fair that some fans are downright confused about the whole sloth and Cinderella thing. It definitely stands out in a list chock full of models, real estate agents, and social media gurus.

"Alex D.'s occupation is a sloth. #TheBachelor you're trying too hard," one person complained on Twitter.

"A Cinderella as a job can we get a explanation #TheBachelor," a commenter wondered.

Others, however, found the unique job descriptions entertaining.

"Pretty excited about this upcoming season of The Bachelor now that we know a little more about who these girls vying for Colton's affection will be," one fan wrote. "I know who I'm rooting for... THE SLOTH FROM BOSTON, OBVI! Marry that sloth, Colton!"

Someone else joked: "Best occupation on this season of #TheBachelor: sloth."

It appears that the list released today is just the tip of the iceberg. There's also a contestant who refers to herself as the "hot-mess express," a nickname that seems destined for reality TV. ABC's website teases:

What does a pageant star who calls herself the 'hot-mess express,' a confident Nigerian beauty with a loud-and-proud personality,; a deceptively bubbly spitfire who is hiding a dark family secret, a California beach blonde who has a secret that ironically may make her the Bachelor’s perfect match, and a lovable phlebotomist all have in common? They’re all on the hunt for love with Colton Underwood.

There ya have it, folks. I hate to repeat a Bachelor cliché, but this season is shaping up to be the most dramatic season ever.