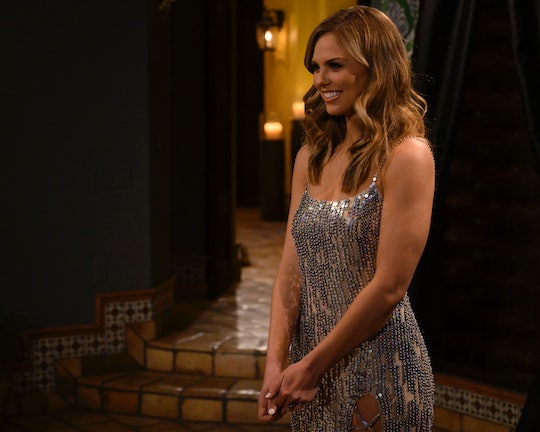 Hannah Put Her Guys Through Childbirth On Their 'Bachelorette' Group Date

There have been some off the wall group and one-on-one dates on The Bachelorette in the past, but Week 3's first group date probably took the cake. Hannah took a group of her guys on a date to quiz and teach them about the wonders of giving birth and it was pretty amazing. And after The Bachelorette taught women's health, it will probably go down as one of the most satisfying group dates ever.

Hannah explained in the episode that she wants to have kids someday and wanted to see what her contestants know about pregnancy and childbirth. Surprisingly, not all of the men were as educated as you might hope and some of them thought that an organ women grow during pregnancy was the uterus. It was definitely one of the more fun group dates, if only because it showed a more vulnerable sign of the contestants.

The date included the men wearing pregnancy bellies to show them how it feels for women to carry a growing belly for nine months. They also had to get clothespins snapped to their nipples to simulate breastfeeding and although nothing can truly show them how it feels to have a newborn gnaw at your sore breasts, it was pretty great.

Later in the group date, Hannah's guys had to lay in a bed and endure a labor pain simulator. To be fair, Tyler C. looked a little more glamorous than most women look after they have been in labor for 15 hours, but John Paul Jones' over the top screaming more than made up for it. After the date, most of the guys seemed to have a newfound appreciation for mothers and their own specifically. I'm sure that was the whole point, even if it would have been a little more satisfying to see the guys go through labor pains and discomfort for a little longer than they had to on the date.

The Bachelorette typically uses its first few dates of the season to get the more light-hearted date ideas out of the way. The more important dates will come later on in the season, but it was still hilarious to see The Bachelorette try to teach Hannah's contestants about the joys and struggles of pregnancy and childbirth. Hopefully it helped her guys to appreciate her as a woman a little more and hopefully they took something more from the date than trying to put on a brave face in front of Hannah.

The date idea was definitely unique, but it wasn't out of the realm of Bachelor Nation dates as a whole. Becca went on a date during her season of The Bachelorette wherein she and one of her guys, Blake, smashed furniture, walls, and appliances while Lil Jon performed as their private DJ. And during one of Ben Higgins' dates during his season of The Bachelor, he had to wear a blindfold and identify his contestants by smell. So while this women's health Bachelorette date was interesting, it wasn't surprising on a franchise like this.

If some of Hannah's guys were uneducated to the point of concern, the date would have been the perfect wake-up call for her. It would have helped her to weed out some of the less viable contestants. Luckily, the guy weren't as cringy as they could have been and overall, it made for an entertaining group date.

Because it's still so early in the season, I expect a few more awkward group dates, but none will probably top the unexpectedly educational group date some of the guys got to go on in tonight's episode.