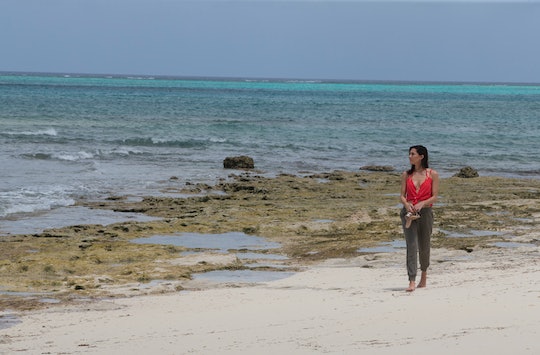 For the second time this season on The Bachelorette, an episode was interrupted by a breaking President Trump-related announcement, but at least we have vaguely entertaining crossover tweets to look forward to. This time, just as the group was settling in for their week in the Bahamas, The Bachelorette was interrupted by Trump's SCOTUS pick announcement, and it was arguably more stressful than the last time Becca's search for love was derailed.

Last month, it was Trump's North Korea summit and the all-important footage of the two countries' leaders shaking hands for the first time that put The Bachelorette on hold for awhile. Luckily, the meeting was pretty uneventful (though that didn't stop ABC anchors from dissecting every single moment of body language) and the episode ran in its entirety when it resumed. This interruption worked similarly; The Bachelorette picked back up after Trump's announcement and ran overtime, so we didn't miss a moment of this week's dramatic episode.

As for Trump's SCOTUS nomination, it only added to the night's drama. According to the New York Times, President Trump had narrowed the list down to two finalists, Brett M. Kavanaugh and Thomas M. Hardiman, as of Monday morning. Ultimately, at 9 p.m. on July 9, Trump announced that he was nominating Judge Kavanaugh to the Supreme Court.

White House Counsel heavily favored Judge Kavanaugh while Trump's own sister Maryanne Trump Barry was in the President's ear pushing for Judge Hardiman, a colleague of hers. Amy Coney Barrett and Raymond Kethledge were two other judges on the shortlist for SCOTUS nomination but Trump reportedly didn't discuss them in his talks leading up to the announcement.

After a lengthy intro, which invoked President Reagan several times, Trump welcomed his nominee to the podium. Kavanaugh was first appointed by President George W. Bush, and he's served on the U.S. Court of Appeals since 2006. A graduate of Yale Law School, he'd previously clerked for Justice Anthony Kennedy, whose retirement last month ushered in Kavanaugh's nomination. Justice Neil Gorsuch, who Trump nominated last year and successfully appointed, also clerked for Justice Kennedy. Following Judge Kavanaugh's speech, which served as an introduction to himself and his family, ABC News cut to both pro-choice and pro-life protestors gathered outside the Supreme Court. Of course, Bachelor Nation was armed with jokes.

Naturally, the question on everyone's mind as they tuned into the announcement was what Kavanaugh's nomination meant for abortion rights. Stacking the Supreme Court bench with conservative judges was a promise Donald Trump campaigned on and it appears that he's following through on that less than two years into his presidency. If Kavanaugh is appointed, the 1973 Roe v. Wade ruling that made abortion legal in the United States could be overturned.

First, he'll have to face the Senate Judiciary Committee hearings and then their recommendation will go to the full Senate for confirmation. Concerning to pro-choice advocates is Kavanaugh's 2017 decision that temporarily barred an undocumented pregnant teenager in immigration custody from obtaining an abortion she had requested. The decision was later overturned, but Kavanaugh's ruling pushed the woman into her second trimester before she was finally able to access the procedure.

Even if Roe v. Wade doesn't come before the Supreme Court again, it's still possible that a conservative-leaning roster of judges could continue to restrict abortion rights, making it harder and harder for low-income people especially to access abortions, even while they remain legal. Needless to say, the realities of Trump's SCOTUS pick announcement put a damper on an already tense episode of The Bachelorette. Unfortunately, Bachelor Nation's dose of escapism ended with two more breakups.