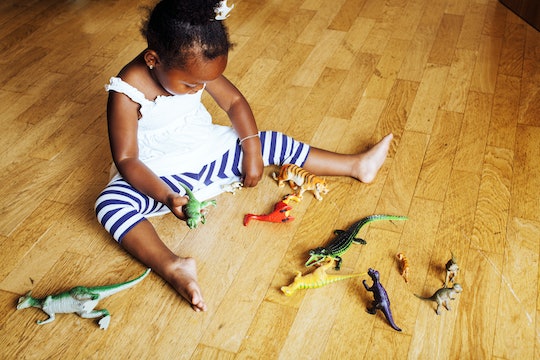 Children *Must* Have Unsupervised Playtime To Develop Properly, Doctors Say

Gone are the days of moms telling their kids to play outside until the streetlights come on. But should they be? Aside from giving parents a break, doctors are saying kids reap a lot of developmental benefits from unsupervised playtime.

According to a study by University College London, having unsupervised playtime makes children more social and more active. Harvard Graduate School of Education seconds this in an article saying free play helps kids develop important skills like creative thinking, analyzing patterns, using empathy, regulating their own emotions, and so much more. Doctors say that free play is necessary for a child to develop into a healthy and happy person.

“Play is a child’s work,” says Kathryn Smerling, PhD, LCSW, family therapist in New York City, in an interview with Romper. “Kids need to be able to play without an adult directing the play because that’s the way a child learns. By building a building, it tumbling down, and then rebuilding it, they’re learning to tackle failure and build resilience. It’s how a child learns how to fail, succeed, share, and negotiate.”

Dan Marullo, PhD, pediatric psychologist at Children’s of Alabama tells Romper that play is crucial to every child’s cognitive and social growth, and that the more they play, the better they’ll develop. But he says unsupervised play doesn’t mean children should be left alone or put in unsafe environments. Instead, parents should think of it as “child-led” playtime.

“’Unsupervised’ doesn’t necessarily mean that adults aren’t present, and how much presence adults have should be age-dependent. It can help to think about this in terms of adult-led play versus child-led play. If you think about play as the natural ability of the child to explore their world and interactions, the more play is directed by them, the more they’re learning.”

Too much adult interference can prevent kids from developing their own life skills through playing, like the ability to resolve conflict. “If you watch preschoolers play, they get into little arguments, but if you leave them be, they work it out. If adults interject and direct that, they don’t have the ability to learn those skills on their own. They need the opportunity to get out there, get dirty, and make mistakes, both alone and with their peers,” Marullo says.

Of course, parents aren’t lying in wait to disrupt their child’s development — it’s important to make sure your children are safe, and not all families live in areas with access to safe outdoor environments. To get the benefits of unsupervised play without turning a blind eye, Jennifer Nitz, OTR/L, occupational therapist at Wolfson Children’s Hospital of Jacksonville in Florida, recommends bringing children together around a creative activity.

“I’ll give you an example I would use with my son. I would probably have a playdate with some of his peers from his class. I’d set them up at the table with stickers, paper, crayons, puzzles, and things like that, and encourage the kids to make a card for their mom or dad, or try to solve the puzzle together," she tells Romper. "Crafts help them to independently make something and be proud of it. It can be as simple as making a card or picture, finger painting, or a craft kit as they get older. The peer-to-peer interaction with making a kit from a box is great because they’re going to read the directions together and try to collaborate about what they’re going to make."

And as children get older, their experiences solving problems during playtime help them solve more complex issues. “As you get older, you’re exposed to more people and more ideas, and you build on those early experiences,” Marullo says. “An 8-year-old playing baseball with their friends negotiating whether the ball was foul or not, those are skills they’re learning about how to interact with people. It’s no different than the 4-year-olds tussling over the same toy, but if you don’t have those experiences when you’re 4, it’s harder to build on when you’re 8, and then 16. That’s why play is so important.”

The World Health Organization says children 1 year of age need at least 30 minutes of physical activity a day, like tummy time or floor play. For children ages 1 through 4, the WHO recommends three hours of playtime to ensure healthy physical development, but what about those social, emotional, and cognitive skills? Nitz says there are some signs a child needs more time to play freely, specifically if their interpersonal skills need improvement.

“We want to make sure that our kids are being social, that they’re building relationships with peers at school, and that they’re developing those skills. If a parent notices something that doesn’t seem normal, that’s a good time to promote those interactions with family, peers, and others in the community,” she says. Nitz suggests sleepovers, playdates, team sports, and community events as opportunities for your child to interact with other kids in an undirected way.

Many children today seem to have pretty busy schedules, but Marullo and Smerling urge parents to make time for play. “It does seem like kids have more and more scheduled activity,” says Marullo. “We see kids getting burnt out and showing physical symptoms that are stress-related. They have school, then band practice, soccer, and on and on. A child does not need to be scheduled every minute of the day, and in fact, they shouldn’t be. Our tendency these days is to want to give our kids all the advantages possible so when they’re 18 they can go to the best colleges. What kids really need is that downtime to play, read, and mess around with art.”

“Children learn by play, and depriving them of free play is depriving them of their development,” Smerling says. “There has been a tremendous amount of research over the years that shows play is how they learn best.” So basically? Back off, parents. Your kid's got this.