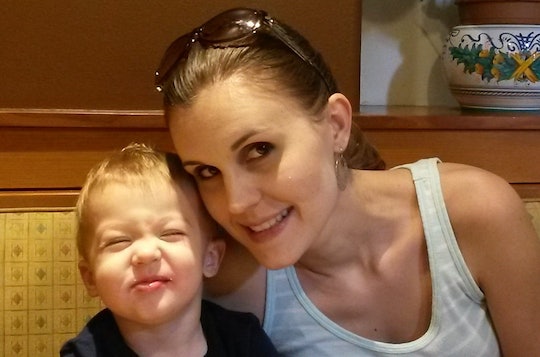 I never understood the affects society would have on my parenting until I became a mother. Even now, six years later, everything from sleep methods to a mother's choice in diapers seems to be hot topic that's open to debate to everyone. And because everyone's opinion is fair game, one thing that had always worried me was potty training. Before my son was even ready to be potty trained I was a nervous wreck about it. I'd heard of some parents starting the process at 18 months old, which in my opinion, sounded way too difficult. How could my toddler use the bathroom if he couldn't even tell me he had to go? So I waited, but each month that passed made me stress more. When I started researching the signs a child is ready to potty train, I realized my 2 year old showed none of them. I was freaking out until my pediatrician gave me the best advice on potty training ever. To be honest, I'm still thankful for it today.

When my son was born, I felt as though I was thrown head-first into the "mommy wars." Facebook, the media, and even other women with kids' comments about parents like me made me feel constantly judged. Just because I didn't want to force my child to potty train before they're ready, people treated me like I was a "lazy mom." No matter what I did, I felt like there was always a better, smarter, safer, more organic way of doing things that I'd failed to see. I knew pro-vaccine women who judged anti-vaccine moms, cloth-diapering advocates who shamed disposable-diapering moms, and let's not even get started on the "breast is best" debate. Due to a few judgmental comments and watching how other moms treated each other, I felt like I was in a race. Society made me feel like kids were expected to read, be potty trained, and behave perfectly in a grocery store by the age of 2. And because my son wasn't, I felt like I'd failed.

At my son's three-year well check, my pediatrician asked if I'd started potty training yet.

Judgments aside, I feel like our society also has a huge problem with rushing our children. We're made to feel that the age age their children started crawling, walking, talking, and even using the potty is a bragging right, that somehow by doing it "sooner" or "earlier" makes us better parents and more-talented people. As if there is some trophy that goes out to the first child to learn how to go number two in a toilet. As if we're all worried that our kids will enter middle school still in diapers because we failed to teach them soon enough. I don't understand the harm in slowing down a bit more and letting our kids be kids a little longer. So in an effort not to rush my son, I let him call the shots when it came to potty training.

When my son started nearing 3 years old, I decided that it was probably time to start potty training. I also had a 1 year old at home at the time so I wasn't in a huge rush to start the whole process. People may think I'm nuts, but I never thought changing diapers was a big hassle. It was quick, easy, and didn't require a lot of work. Potty training, however, was a lot of work. I dreaded it — especially when I started the first trial run. After countless tears and accidents over the course of a couple days, I was chomping at the bit for advice. And since none of my close friends had kids yet, I decided to ask my pediatrician for help.

He told me to "wait until he is so ready that it's easy."

At my son's three-year well check, my pediatrician asked if I'd started potty training yet. The poor guy was then forced to listen to me anxiously babble on about all of my thoughts on the matter. I told him that I'd started once but my son wasn't really catching on so I felt guilty making him continue. That's when my son's pediatrician gave me the best advice ever. He told me to "wait until he is so ready that it's easy." He told me "if you start too early, they'll have accidents for months, but if you wait until they're actually ready it'll take about three days." I left his office that day feeling like a weight had been lifted off my shoulders. I let go of society's expectations and decided to wait until he showed signs he was truly ready.

There are plenty of signs out there that a child may be ready to use the potty, and of course the age they show these varies from child to child. Months after that doctor's visit, my son turned 3 and I noticed that he was showing signs he was ready to try again. Our experience this time around couldn't have been more different than when we'd tried months earlier. This time he was ready, and so was I. After three days of constantly asking him if he had to go potty, giving him stickers or candy when he went, and praising him nonstop, it was finished. My 3-year-old son was potty trained and would thankfully not be heading to high school in diapers. I had a new sense of confidence, thanks in large part to my son's doctor.

Taking a cue from my little boy not only made things way less stressful for me, but they also made him feel in control and confident.

Afterwards I felt validated for not rushing my son to do something he wasn't ready to do and I felt joy knowing that my little boy was proud of himself for his newly gained independence. The doctor's words were so simple yet profound at the same time: taking a cue from my little boy not only made things way less stressful for me, but they also made him feel in control and confident. And I was so glad I cut myself some slack for not having him potty trained at an early age.

Since then, I've realized that I don't need the added stress that comes along with rushing my son into being first or even 50 for something, and I definitely don't need the judgment our society inflicts on us as mothers if he's slower to do something than his peers.

At the end of the day, I'm just trying to do the best I can. Potty training, breastfeeding, diapers, vaccines... to me, they're all matters of preference and ability. What works for some moms just won't work for others and that's OK. Waiting to potty train my son taught me that just because society makes us feel like there's pride in doing things faster and quicker and earlier doesn't always mean that it's helpful or even doable for our lives. My second child was also potty trained after he showed the signs, and surprisingly it was, once again, an easy task. There are no trophies or medals given out to the first parent to teach her child a new skill and honestly, even if there were, there's no trophy in the world worth my sanity. Thanks to my pediatrician, I now leave society's expectations out of my parenting and just do what feels right. It works for my kids — and me, too.