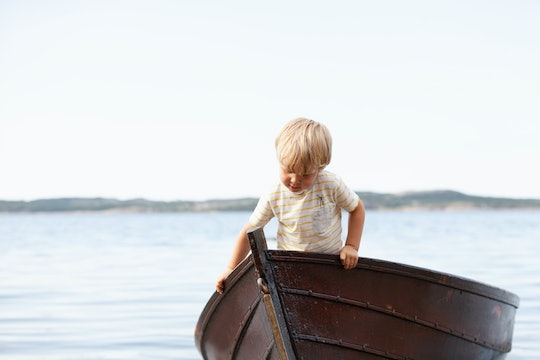 If you could raise your children anywhere in the world, where would it to be? This is one of those fantasy questions parents ask themselves, but the reality is that some countries really are better for kids than others. So what is the best country in the world to raise kids, you ask? If you're considering a move with your family in response, you might want to pack some bulky sweaters because gets cold there.

The medical publication The Lancet, in partnership with the World Health Organization and UNICEF, recently conducted an extensive study into which countries across the planet would be considered the best to raise children. Researchers looked at 180 countries and rated them on what they referred to as a "child flourishing index," measuring important factors like child survival rates, how many years they spend in school, nutritional data, maternal mortality, prevalence of violence, and teen birth rates. Researchers also looked at how children's future is being protected regarding climate change regulations.

And it seems one country came out better than the rest. The relatively small Scandinavian nation of Norway, known for its mountains, fjords, and clean living, ranked best out of all 180 countries. Conversely, the United States ranked a rather dismal 39th out of 180.

South Korea and the Netherlands followed Norway to make it into the top three countries, while France and Ireland are apparently doing reasonably well by their children as they came in fourth and fifth, respectively.

While these countries fared the best in the ranking system as outlined by The Lancet, there's still room for improvement in one area in almost every country involved: excess carbon emissions. In fact, UNICEF noted in an article about the study that there was not one single country that is doing enough to safeguard the environmental future for their children. "While some of the poorest countries have among the lowest CO2 emissions, many are exposed to the harshest impacts of a rapidly changing climate," co-chair of the Commission Minister Awa Coll-Seck explained. "Promoting better conditions today for children to survive and thrive nationally does not have to come at the cost of eroding children’s futures globally."

Even countries that scored high in other areas like education and nutrition did not do well when it came to dangerous carbon emissions. "No country is in the right place with adequately making children flourish today and in the future," Dr. Stephan Peterson, an author of the report, told CNN.

The report recommends that countries end excess carbon emissions, introduce important legislation to protect children's rights and their health, and consider children's matters in law-making decisions. "The opportunity is great. The evidence is available. The tools are at hand," Dr. Richard Horton of The Lancet said. "From heads-of-state to local government, from UN leaders to children themselves, this Commission calls for the birth of a new era for child and adolescent health. It will take courage and commitment to deliver. It is the supreme test of our generation."