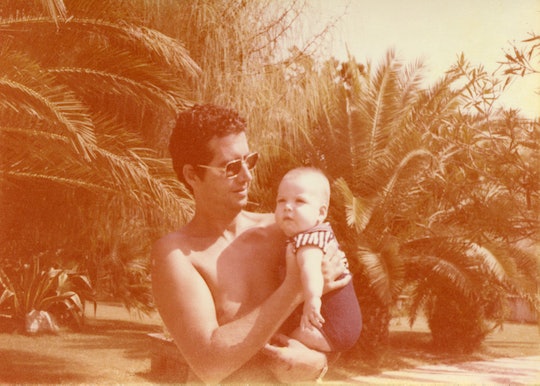 Why Are Dads *Still* Going Drinking After Baby Is Born?

So her husband — a professional chef — offered to pick up a celebratory dinner from his friends at a local restaurant. Unfortunately, instead of racing back to bring his hungry wife food, Gyetvan’s husband (now her ex) was gone for several hours.

“And when he returned, he was a little drunk and had already eaten,” Gyetvan says. “Celebrating with the dudes was clearly way more important than celebrating with me and our new beautiful child.”

Dads (or partners) behaving badly post-birth are not as Instagrammable or social-media worthy as pics of baby detailing the exact length, weight, and timestamp of their birth. But online, you can find many stories about dads heading out to “wet the baby’s head” — go drinking at the local pub after the birth — as did Prince William after the birth of Prince George, per The Mirror, alongside stories like the husband who complained on Dadsnet recently about being "ignored" by medical staff during his wife's labor (not so much as a cup of tea, he said). On one end of the spectrum, we have gripes about uninvolved dads; on the other end are people like Meal Train Dad, who rose to fame for his elaborate postpartum meal requests. What these pilloried dads share is confusion over what a dad’s role should be after birth. And that lack of consensus over their duties postpartum is something that affects many families negatively, hilarious stories notwithstanding.

It happened to Jaime Malone, a licensed professional counselor, whose husband perhaps should have known better.

On their first night home from the hospital with newborn twins who needed to be fed every two hours, Malone’s husband fell into a deep sleep, just a few feet away on the bed but out of reach.

“So when I was done nursing and needed help getting back up — remember, nursing two babies simultaneously, five days post c-section — I could not wake him from his deep slumber,” Malone says.

Yes, Malone was angry. But, she says, there are other explanations — valid ones even — for partners behaving badly after the birth of a child.

In her case, Malone’s husband was exhausted having had little sleep in the last five days (though, of course, either had she).

Yet, fathers also have their own mental and emotional experience of becoming a parent that often doesn’t get the attention it needs.

“My own husband later explained the day he became a father as the scariest day of his life,” Malone says.

When she went into labor at 36 weeks and had issues with her blood pressure, along with other complications, her husband was a nervous wreck.

“So even in the delivery room, a mom and a dad are having very different experiences, and when we discount dad’s experience, we may mis-label and misinterpret the choices he makes.”

By the time I delivered, I wanted to kick him in the face, but I couldn’t because of the epidural.

I wanted to roll my eyes when I listened to this advice. So you’re saying that after a major surgery or after pushing a baby out of your vagina for 48 hours, women still need to be considerate about their partner’s sensitive feelings?

But, it turns out that science unfortunately backs this little nugget up, too.

A 2014 study published in Pediatrics found that depression amongst new dads increases by 68 percent during the first five years of a child’s life. In other words, 25 percent — or 3,000 — new fathers become depressed daily. Their hormones also shift during pregnancy and post birth, with testosterone levels plunging and estrogen, prolactin and cortisol levels rising. The reason? No one knows.

What we do know is that the result of these hormone fluctuations in men is an emotional rollercoaster, close to what we see in women.

“In general, men experience a range of emotions that are similar to women’s emotions during and after such a significant life event,” says Karen Kleiman, a licensed clinical social worker and founder and director of The Postpartum Stress Center in Philadelphia.

Many men suppress these feelings, which can lead to further problems, such as irritability, anger, rage or acting badly, Kleiman says. In other words, if a man is hiding his feelings post-birth, it may be disguised as bad behavior.

Kekua Kobashigawa’s ex-husband, for example, spent the majority of her 40 hours of labor on the phone with his mother (maybe he needed her motherly love to push him into the next phase of his life)? But Kobashigawa wasn’t impressed.

“By the time I delivered, I wanted to kick him in the face, but I couldn’t because of the epidural,” she says. “I tried.”

Often, men don’t want to be a burden on their partners,especially when they’re giving birth or directly after (thanks, men!), says Mark Williams, author of Daddy Blues, and keynote speaker with Fathers Reaching Out. But, Williams says, when fathers are suffering, it can impact the mother’s mental health, which has an impact on the child’s development.

So essentially, if your partner is acting out, it’s key to have a *calm* conversation about why he isn’t being the supportive partner you had envisioned.

“Make sure you surround yourself with support, and be non-judgemental, giving dad the space to open up about how he’s really feeling,” Williams says.

No, having a mini-breakdown isn’t ideal in post-delivery. But we can’t always choose the time and place for it. And that’s common ground.

More Like This
How To Support A NICU Parent, From Moms Who’ve Been There
Here's How To Keep Your C-Section Incision Dry
How To Tell If Someone Is Lying To You: 34 Signs To Watch For
How Do I Date As A Widow Without Guilt?