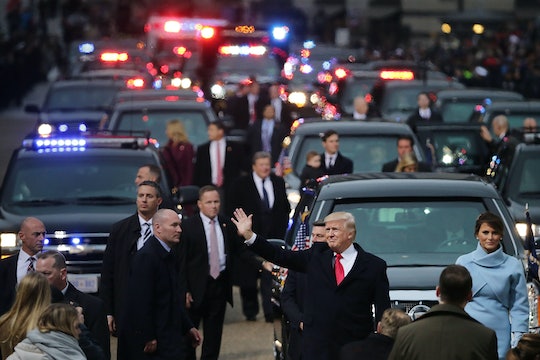 These Inaugural Parade Memes Are Hilarious

While Inauguration Day's festivities started out on time — it didn't necessarily go off without a hitch. Between it raining when President Donald Trump gave his inaugural address to the inaugural parade's hour late start, Inauguration Day proved that not everything runs smoothly. Another mishap during the inaugural parade was the amount of empty seats along the parade's route. Twitter, of course, had fun with this — and the best parade attendance memes made by users on Twitter are incredibly funny.

The inaugural parade was expected to start around 3 p.m., according to TIME. But instead, the parade started more than an hour late. This delay was due to multiple factors — such as protestors and rainy weather in Washington D.C. However, one would not expect that to deter Trump fans and citizens from coming out, watching, and supporting the parade. Instead, the parade did not have that big of a turnout. In order for inauguration attendees to watch the parade from the bleachers that lined the parade's route, people had to have tickets to access those bleachers. It is not clear why the bleachers were so empty — especially if tickets were so limited. The empty bleachers certainly caught the attention of Twitter users, who decided to turn the emptiness of the parade and the inauguration into memes.

The parade wasn't the only thing with a smaller attendance from years past. According to Newsweek, the amount of people attending Trump's swearing in ceremony was down this year, too. The D.C. Metro system — the form of transportation attendees used to get to the mall — counted 193,000 riders to the inauguration this year compared to the 513,000 for Obama's first inauguration in 2009, and 317,000 in 2013.

Although the parade's attendance might have looked a little empty, the hilarious memes and tweets that came out of the 2017 inaugural parade were definitely worth it.