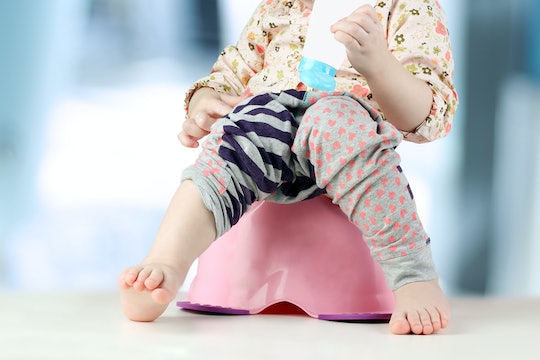 Well, Yes, There Actually Is An Ideal Position For Toddlers To Poop In

When you think about it, we parents are pretty much dictators for the first couple of years of our kids' lives. We have the final say on their clothes, toys, and nursery decor. We decide whether they get spinach or sweet potatoes for lunch, whether they go to the playground or play group, and whether their bedtime is early or late. Is it any wonder, then, that children take charge of the few things they can control, such as when they use the toilet and what position they prefer to poop in?

Some toddlers just naturally take to toilet-training as soon as they're old enough to recognize that they don't like wearing dirty diapers. Others are slower to make the transition. Both, assure experts, are perfectly normal. "Just like walking and talking, all children develop at different rates," New York psychologist Dafne Milne, PhD, tells Romper. "One factor to consider is whether it's the child who's ready to potty-train, or the parent. Sometimes the two don't coincide!" Milne adds that around age two or three, most children show signs of training readiness such as asking for a diaper change or being curious about other family members using the toilet. When you notice these signs, then it's a good time to bring out the training seat and the copy of Once Upon a Potty.

Toilet-training isn't an all-in-one process, however. Many children quickly get the hang of going to the bathroom to pee, but are reluctant to poop in the potty. It may seem baffling to us grownups, but it helps to understand that the whole toileting process can be overwhelming for a young child. "Some children are nervous about the flushing sound; some may have a reaction to the splash that may happen after use," explains Milne. Toddlers sometimes have trouble grasping the fact that their poop isn't actually a part of their bodies, and so they may be frightened at seeing their poop come out, Texas pediatrician Adiaha Spinks-Franklin, MD, explained in an interview with Parents.

One of the biggest obstacles to potty use, however, is simply fear of the pain. "If poop ever hurts during the process, then kids don't want to do it," pediatrician Natasha Burgert, MD, FAAP, tells Romper. This, in turn, starts a vicious cycle, she explains: A fearful child holds in the stool as long as possible, which stretches out the nerves in the rectal wall that trigger the awareness of pooping, so the child keeps holding out because they don't realize they have to go. This leads to constipation, accidents with liquid poop (encopresis), more pain, and frustration for both child and parents.

One way to make pooping easier is simply to change the position in which your child sits while on the potty. Squatting — Burgert describes it as sitting with the knees elevated above the hips — naturally lets the rectum straighten out, allowing waste to come out without straining.

Science bears this out: In one Israeli study, volunteers pooped more quickly and comfortably while squatting than while sitting or standing. "Sensation of satisfactory bowel emptying in sitting defecation posture necessitates excessive expulsive effort compared to the squatting posture," concluded the researchers. (In other words, squatting makes for better pooping!)

To put your little toilet-learner into proper pooping position, you can either stack books under their feet high enough to elevate their knees, or buy a stool specially designed for toddlers. The good folks at Squatty Potty™(yes, the ones with the rainbow-unicorn ads) have a SquattyPottymus™ stool for children that's the right height for little feet and shaped like a hippopotamus.

The keys to successful toilet training, experts agree, are patience and encouragement. "Children want nothing more than to feel important, loved, cared for, and special," says Milne, who adds that little rewards and lots of praise for using the toilet can go a long way. She suggests establishing several potty times during the day, such as half an hour after mealtimes, when a child is likely to need to go. Have the stool or books ready, so your toddler recognizes that it's time to get into position. As for the underwear vs. pull-ups debate, Burgert says that's totally up to parent and child. "It's awareness of the [need to] poop, not the urgency," she says. And some children may simply need more time to get comfortable with using the potty for #2, she adds. "It's completely normal for a child to be fully trained to pee, but still ask for a diaper to poop."

Above all, try to relax. Once your child becomes a total potty pro, you'll wonder why you ever worried in the first place, and by then, your toddler will be independent enough to start arguing with you over what outfit to wear!

More Like This
Can Elderberry Help Prevent Illness In Kids? Doctors Weigh In
What Is RSV?
Tips For Apple Picking With Kids
These 9 Potty Training Techniques Will Work On Even The Most Stubborn Toddler