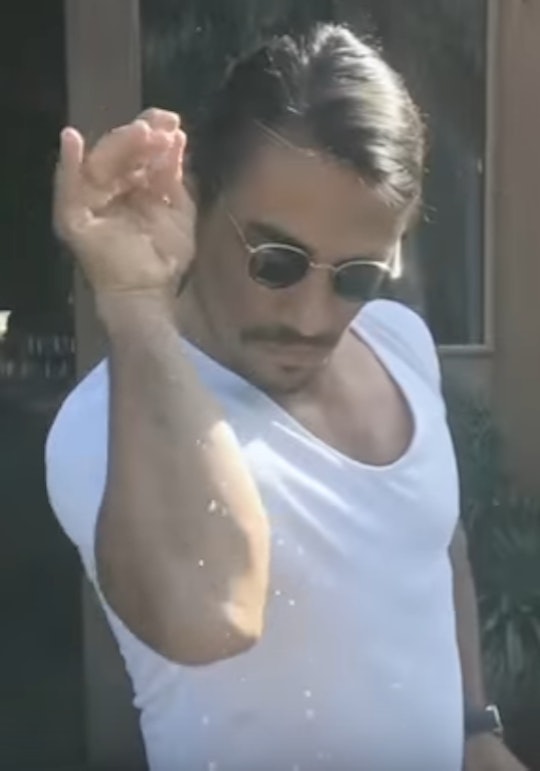 These Salt Bae Tweets Will Get You Through

If you haven't yet heard of Salt Bae, you're welcome. The latest internet food guru, all white t-shirts and tight jeans and smoldering goodness, is doing his part to reintroduce us to a little thing called steak. Sexy, beautiful steak topped with crystalline granules of salt, sprinkled just so. I've just spent some time going through the best Salt Bae tweets because that is my job and my job is amazing.

Salt Bae, otherwise known as world-renowned Turkish chef and butcher Nusret Gökçe, has not only taken the internet by storm, he's been turning everybody on with his wanton ways with meats. As James Corden from The Late, Late Show pointed out:

Cut to a video clip of Salt Bae giving a slab of meat a much better massage than I've ever gotten in my whole life... and now you have taken in the power of the Salt Bae. If you were a vegan before or trying to reduce your sodium as part of a New Year's resolution, I might have just ruined your life.

His chain of steakhouses throughout Turkey and now in Dubai, Nusr-Et (which literally translates to the word "meat" and I'll let you draw your own conclusions there), has a varied menu, if you are a meat eater. If not; maybe just go for the floor show if you ever find yourself in Turkey or Dubai.

If these tweets are any indication, people might be willing to pay for a flight just to see the man himself. Especially if he's sprinkling a little salt the way we like it.

Then came the obligatory celebrity endorsements.

Salt Bae's sassy spicing is being used as a signature mic drop all over the Twittersphere, a little panache for an otherwise dull world.

I know the world will most likely move on from Salt Bae within the next few weeks (cough, cough, Ken Bones). I know his salting game will get copied to death and everyone will get tired of it. But I'm really hoping the spirit of Salt Bae, the swarthy meat slapping genius that he is, lives on in our hearts.