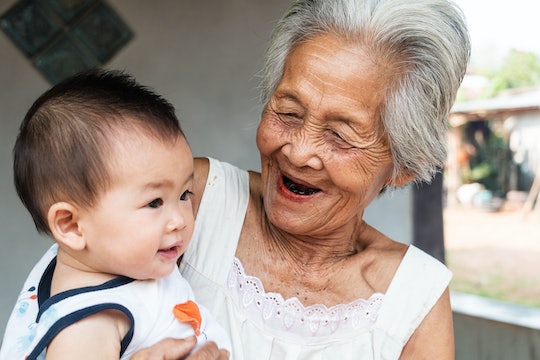 When my kids were first born, I had grand intentions for how I planned to raise them. Admittedly, most of my audacious goals fell away as I learned just how hard parenting can be. What I do wish that I would have held onto though is the desire to teach my kids a second language. Living in Texas, a familiarity with Spanish is almost imperative, and while my kids will ultimately learn the language at school, it might have been easier for them as babies.

When it comes to the best time to teach your baby a second language, Erika Levy, Ph.D., CCC-SLP, Associate Professor of Communication Sciences and Disorders at Teachers College, Columbia University says, "The earlier the better! Even within the first 6 months of life, babies become keenly aware of the speech sounds in the languages that surround them."

Dr. Levy explains to Romper that the best time to begin teaching your baby a second language is before the one year mark. "After the first year or so, it becomes much more difficult for them to 'hear' the many vowels and consonants that don't exist in the language(s) they are surrounded by (i.e., in a non-native language)," she says. "Their perceptual differences from native speakers of the language will become evident in their accents when they later try to speak that non-native language. Some of these perceptual changes may be reversible, but the timeline for native-like pronunciation is very early and differs depending on the speech sounds and languages in question — perhaps by age 3 or 5, but certainly before puberty for most people. Other aspects of language (vocabulary, grammar, etc.) are also developed best early, probably by puberty for most people."

To better understand why babies may pick up on languages during this time period, Ellen S. Kester, Ph.D, President of Bilinguistics Speech and Language Services in Austin, Texas, tells Romper how a child's language develops during babyhood. "A lot happens in the first year of life in the development of language. We can think of two different things happening simultaneously. The child’s understanding grows and his ability to speak grows," she says. "On the understanding side, a child first responds to sounds with different reactions, listens when people talk, begins to recognize familiar voices, responds to changes in tone, moves eyes toward sounds, recognizes his/her name, and begins to understand single words, then phrases, then sentences. On the speaking side, babies coo and cry initially, then start early babbling (ba), then giggles. Around 6 to 10 months babbling becomes more complex, and then early words begin."

Parents who are teaching their babies a second language may be concerned about developmental issues with language, or general confusion, but Dr. Levy explains that parents don't really need to stress about this issue. "Learning a second language does not harm the development of other languages," she says. "I can tell you, as a professor of speech-language pathology, that bilingualism does not cause language disorders, despite some urban myths to the contrary. In fact, there are considerable social, cognitive, and linguistic benefits to bilingualism. Of concern only to those of us in a big hurry, though, bilingualism can slow linguistic processing time by a couple of milliseconds."

Dr. Levy also recommends that older children continue to be immersed in the language to hone in on their skills. "If the child needs to speak the language, that is the most effective way for them to learn it," she says. "Send them to a French cooking class, for example, in which they need to ask for a croissant in French in order to get one! Or have them spend time with their grandmother who only speaks that language."

"The idea of a critical period for language learning has been a hotly debated topic for years. You’ll find some studies that support this idea and others that don’t," Dr. Kester explains. "My two cents? Start teaching your child a second language as soon as you can. It’s a pretty simple formula. The more one hears a language, the sooner they learn it. I’ll also add that I don’t believe it’s ever too late to learn a new language. If you can put in the time and immerse yourself, you’ll get there."

More Like This
Here’s What You Need To Know About That Viral 1960s Baby Formula “Recipe”
The Best Apps For Selling Used Baby Gear
Abbot's Formula-Producing Plant Can Reopen In As Early As 2 Weeks — Now What?
24 Beautiful Baby Names With The Same Vibe As Mila