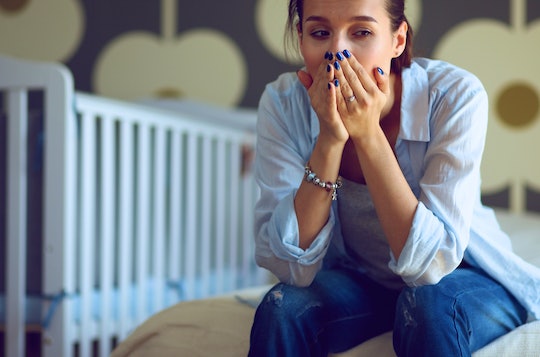 Millennial Parents Really Do Have It Harder Than Any Previous Generation

Millennials are the generation that launched a million think pieces about how too much parental coddling transformed children born between 1980 and 1996 into self-involved snowflakes. But now, millennials are having children of their own and actually, in some ways, millennial parents have it harder than any previous generation. And no, it's not because parenting means they don't have enough time to savor their avocado toast, or because their kids won't smile wide enough in selfies. They're fighting hard to give their children a brighter future, all while facing crippling financial setbacks, a totally different work landscape, and some very scary world events.

One recent analysis from NerdWallet found that the current expenses of raising a baby in a two-parent household with an annual income of $40,000 could come to $21,248 in the first year. About half of millennials thought that it would only cost $5,000 or less.

At the same time that raising a baby costs more now than ever, many millennials are already dealing with financial setbacks unique to their generation. People in their 20s and early 30s came of age and entered the workforce during the Great Recession, and for many, that economic downturn has had lasting effects.

Millennials left college having racked up student debt at higher rates than previous generations. According to Time, over two-thirds of students getting a bachelor's degree now graduate with debt — averaging about $35,000. Back in the early 1990s, that figure was $10,000, and it only affected about half of college grads. So, saddled with higher debt, millennials entered a rapidly changing work landscape, thanks to the rise of digital technology and, of course, the seemingly inescapable side hustle.

Many millennials work multiple jobs, cobbling together a living through the gig economy, often without receiving the sorts of stable benefits that past generations got used to — the sorts of benefits, like health care and a retirement plan, that are so important when raising a family.

As Jia Tolentino wrote for The New Yorker, the gig economy celebrates "working oneself to death," or, in the case of pregnant millennial Lyft driver Mary Joy Clarence Cabarle, continuing to pick up fares even while going into labor.

Of course, that's not all. Add in fears about unstable nations getting nuclear weapons and how climate change will affect a baby's future, and it's no wonder that modern parenting seems much more difficult than in generations past.

Still, despite all that bad news, millennials are resilient. They're a generation engaged in social responsibility and making the world a better place, and they're the most educated generation to date.

So, babies born to millennial parents may not always have the same type of financial stability of, say, the baby boomers, but they're still pretty darn lucky. Because while millennial parents may have it hard in some bigger and unique ways, they're clearly willing to put in the work to ensure their little ones' well-being and futures are cared for.

More Like This
Reddit Applauds Mom Of Five Who Stood Her Ground & Left Sleeping Dad Behind
Dr. Jill Biden Just Delivered Some Frank, But Powerful, Advice On Motherhood
Gathre’s Winnie The Pooh Collection Is Finally Here
How To Build An After-School Routine That Works For Your Family