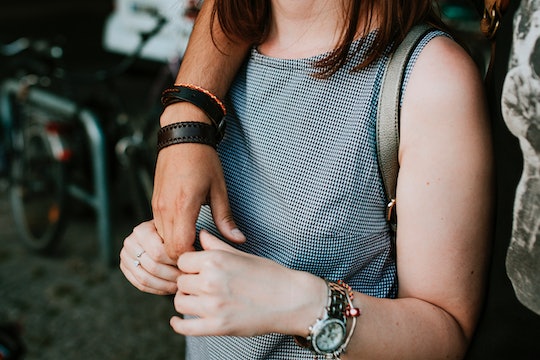 You know how most often, the fights you have as a couple are about the most ridiculous things? Like who didn't change the toilet paper roll or who got more time "off" this week or who got the most sleep last night? I've had plenty of those kind of fights with my husband of almost eight years, but I'll never forget the single most important fight of our marriage to date, because it was one that not only changed my marriage, but actually changed my entire life.

The fight of our lives went down about four years ago. I was working night shift as a nurse while pregnant with our third child and I was absolutely, horribly miserable in my life. I was totally exhausted, obviously, but aside from the physical toll that the night shift, pregnancy, and caring for our other two children had taken on my body, I was also fighting what felt like an internal war every single day. I wanted out of my career and I was wracked with guilt over my feelings. Didn't I go to school for four years for that nursing degree? Why did I want to leave an incredibly well-paying and flexible job? Wasn't I supposed to feel good about having a job where I actually made a difference in the lives of others? Shouldn't I just count myself lucky enough to even have a job in an economy where so many people are struggling? Shouldn't working as a labor and delivery nurse make my heart soar with happiness?

What was wrong with me?

My internal barrage of self-doubt and negative self-talk did nothing but make me exhausted, cranky, miserable, and frankly, kind of awful to live with. I was fighting so hard against what felt like a complete revolt within my soul. Working as a nurse didn't just feel like working a job that I didn't really like — it felt like it was sucking the life out of me in every single way. I questioned everything about myself and my life as a result: was I horrible person? Did I chose the wrong major? Would I feel like this forever? Did I just need suck it up and learn to be happy with what I had? I felt like I was trying to keep a calm, smiling face and inside I was running around screaming with frustration. The constant worry and stress also affected me on the job. Even as I was helping patients, I felt like the world's worst nurse. I lived in constant fear of missing a detail that would cost the life of my patient. I was a mess, slowly unraveling and on the edge of falling apart.

Unsurprisingly, my marriage was too.

In that moment, I felt a lightbulb go off. I was so shocked that my sobs stopped mid-cry. It felt like a movie scene, where the protagonist realizes this is the moment that will change everything about her life, because for all intents and purposes, it already had.

Although I wasn't exactly aware of it at the time, I was taking out a lot of my stresses and frustrations on my husband. I projected my misery on him, as if my unhappiness was somehow his fault. And negative thoughts, like if I hadn't gotten pregnant during college, I could've switched my major from nursing to writing like I had planned; if I hadn't been the one with more credits to graduate, I wouldn't have been forced to work as a nurse to support us both; if only he made more money, I wouldn't have to work as a nurse at all. And how could he possibly understand how tired I was, working night shifts and being pregnant and taking care of the kids and everything in our home? I felt like I'd gotten the short end of the stick in our partnership, and suddenly it was all I could think about.

Around and around my cycle of negativity went. But one night, everything changed.

It was New Year's Eve and I hadn't been able to sleep during the day (I'd just gotten off a nightshift) because I was feeling anxious about all of the parties we were supposed to attend. I wanted so badly to go out, but I was absolutely miserable and so tired that even my eyeballs hurt. The only problem was, my husband deeply wanted to go. And that's when the fight happened.

I'd been reading myself this weird script in my head. I thought that being a wife and a mother meant enduring some degree of misery and self-sacrifice, and that I'd somehow be doing something "wrong" if I actually had a career I enjoyed. In my head, I had painted motherhood and marriage to include being miserable to some extent, because I thought, isn't that what moms are supposed to feel?

I rambled and sobbed and vented all of my frustrations to him about how I was so unhappy and how he didn't understand. I told him I felt like he was happy to just let me work my life away, cleaning and popping out kids and clocking in on nightshift after nightshift, pregnant and miserable until I died. How could you do this to me? I cried, wiping away snot. I hate you for this! Must be nice to have a job you don't have to do at 3 in the morning!

Finally, my husband, after enduring what had been years of this kind of verbal diarrhea, snapped. "Chaunie! Find your own happiness!" he screamed and slammed the door behind him, as he whisked our kids away to family parties without me.

In that moment, I felt a lightbulb go off. I was so shocked that my sobs stopped mid-cry. It felt like a movie scene, where the protagonist realizes this is the moment that will change everything about her life, because for all intents and purposes, it already had.

With just four words, my husband made me realize that if I wanted to be happier in my life, I needed to take the steps to make that happen. Only I had the power to change my life and I definitely couldn't expect my husband to do it for me — or blame him when there was nothing about my unhappiness that was in his direct control. I realized that, in a lot of ways, I'd been reading myself this weird script in my head. I thought that being a wife and a mother meant enduring some degree of misery and self-sacrifice, and that I'd somehow be doing something "wrong" if I actually had a career I enjoyed. In my head, I had painted motherhood and marriage to include being miserable to some extent, because I thought, isn't that what moms are supposed to feel?

I gave myself permission to change and grow and evolve, and also permission to admit that maybe, just maybe, I wasn't living up to my to my capabilities.

After he'd left with the kids, I was finally able to look around at the damage I had caused. Being miserable was most definitely not helping anyone. In fact, it really was hurting the very people I loved most: my husband, my kids, and myself. I realized I resented my kids when they wouldn't nap or when they kept me from sleeping after I got home from another nightshift, and I was able to see, for the first time, that there might be some benefit to making myself happy first.

I won't say that things changed overnight after our first epic fight, but my attitude and my mental energy completely shifted. Almost immediately, I made a plan to start changing my life and from there out, and I stopped treating myself as if I was trapped in an endless cycle of nightshifts headed to nowhere. I looked at my job as something temporary, a stepping stone that would eventually lead me elsewhere. I gave myself permission to change and grow and evolve, and also permission to admit that maybe, just maybe, I wasn't living up to my to my capabilities.

I started to make tentative plans and took little steps to pursue a life that I wanted without asking my husband's permission. I stopped seeing myself as a martyr and a victim and broke free of the restraints I'd forced onto myself by telling myself that I was a horrible, selfish person for thinking about myself so much. I gave myself permission to carve out a new life, and although it took two more years before I was able to start my own business and officially clock out of my last nursing shift, I know it all started with that one late-night fight, when, with my husband's help, I finally gave myself permission to be happy.