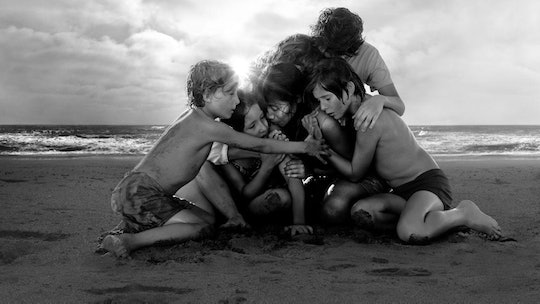 The black and white stills of Roma tell you, even before you know why, that the movie will be profound, a masterpiece, a monument to the lives of the poor and forgotten, probably. "Alfonso Cuarón’s Masterpiece of Memory," Manohla Dargis called it in her New York Times review. "Here," she wrote, "Cuarón uses both intimacy and monumentality to express the depths of ordinary life." The depths many critics were talking about came in Roma's birth scene, which may have been high art, but has traumatized many who saw it without a trigger warning.

CW: spoilers and discussion of pregnancy loss to follow.

No one can deny that Alfonso Cuarón’s Oscar-nominated film is a thing of beauty, as Dargis notes in the Times. It's visually stunning. The film follows Cleodegaria “Cleo” Gutierrez (Yalitza Aparicio, an indigenous actor), an indigenous woman working as a housekeeper for a well-to-do family in early-1970s Mexico City. The film transports you to another world, a life rarely explored: that of the domestic worker, of the indigenous woman, of the truly marginalized.

Cleo becomes unexpectedly pregnant by a guy who immediately abandons her after she breaks the news, and a number of catastrophes serve to foreshadow what may happen with Cleo’s pregnancy. When Cleo is watching over the babies in a hospital nursery, an earthquake causes a chunk of the ceiling to fall atop one premie’s isolette. In another scene, Cleo is about to drink to “the health of her baby,” when she is pushed from behind and drops her cup to the ground. We see the liquid spilled onto the floor — bad juju, we understand.

We know what the film is building to: Cleo is out shopping for a crib when a riot breaks out in the streets (the Corpus Christi Massacre of 1971, per the Times). Within minutes, Cleo’s water breaks and anyone who’s ever given birth could likely tell that things were about to get complicated. At this point, I can feel my heart racing and my stomach flip-flopping at the prospect of what I’m about to witness. The next scene shows Cleo in labor on the way to the hospital, stuck in an endless sea of cars. Once she finally makes it, a doctor says they can’t find a heartbeat, and it all goes downhill from there.

The whole ordeal only takes up about 3-and-a-half minutes, but for those who live with the remnants of PTSD, it is an eternity.

I’m no stranger to pregnancy and infant loss. It makes up a large part of my identity these days. Nearly seven years ago, I went into premature labor and was rushed to the hospital much like Cleo was. I saw the devastating look on my doctor’s face when she explained my baby likely wouldn’t make it. I felt just as helpless, just as lost, just as terrified as Cleo — looking around for a glimmer of hope that would not come. I cried her tears, felt her pain, and in watching the film, I suddenly found myself back in that hospital room again, once again helpless, lost, terrified. Yes, any film where a mother or baby are in danger, are hurt, or die seriously affects me. But none has ever quite caused me the flashbacks that this scene does.

There are many ways to explore loss in film. In Cameron Crowe's Singles, Linda (Kyra Sedgwick) and her boyfriend get into a car accident, which cuts to a scene in which a doctor informs Linda about her loss. It’s difficult, devastating, important, and most importantly, mindful of the population who actually face this kind of life-altering news. In the TV show This Is Us, Mandy Moore’s character loses one of her triplets at birth, a fact we learn as the camera backs off and music fills in the space where there is nothing to be said. The show does an excellent job of addressing this painful reality for so many people, showing the range of grieving processes, and how the pain of pregnancy and child loss never, ever fully leaves you.

Cuarón goes a different route. A route I personally find to be somewhat irresponsible.

The director has us follow Cleo’s entire process as if we were a fly on the wall of her room, in one seemingly endless shot: she gives birth, we see the (stillborn) baby come out between her legs, its cord is cut, its limp and all-too-realistic body is then taken to one side of the room and placed on a table where neonatologists work to try and revive it. We are by Cleo’s side as her gaze stays fixed on the infant she’s just birthed. The deceased infant is brought closer to the camera once more when Cleo is allowed to “meet” her and is forced to say goodbye 30 seconds later. The camera, never moving, shows the doctors take her baby and wrap it up in white sheets in the distance. The whole ordeal only takes up about 3-and-a-half minutes, but for those who live with the remnants of PTSD, it is an eternity.

The rest of the film deals with the aftermath, and on the whole I appreciated it. But that scene wrecked me to my core. Perhaps it was because of how closely it resembled my own experience. I reached out to other moms in the pregnancy and infant loss community, not only warning them of the scene but asking how they felt.

Thirty-seven-year-old Kolleen Hepfner previously experienced a miscarriage and is currently pregnant again. Hepfner, who is editor of literary magazine Drunk Monkeys, did not know about the scene before sitting down to watch Roma.

“Perhaps it’s my heightened sense of emotion (due to) my pregnancy, but the moment the crib shopping scene happened, I was filled with a sense of dread. I watched the whole arc of this storyline through, but I was extremely bothered by it and hid my face as the doctors were working on resuscitating the baby. I was pretty upset about the whole thing and yelled at my friends who had seen it for not warning me.”

Thirty-nine-year-old Alicia Perkins has experienced a traumatic birth in the past, but no losses, and sat through the scene.

“I became physically uncomfortable enough to want to get up and leave the theater. I stayed though. I think the way that the scene is filmed adds so much to the tension and devastation of that moment... You keep waiting for a cut, but instead it’s a slow-motion nightmare you are witnessing in real time.”

The scene is perhaps unbearable for loss parents, but that doesn't mean they don't see the artistic value in capturing the experience for those who haven't gone through it.

Los Angeles resident Saira Hirji, who has experienced several losses, including two due to twin-to-twin transfusion syndrome, appreciated that the film didn’t just gloss over how traumatic this sort of loss could be, despite having to pause the scene.

“I had flashbacks to my own feelings of helplessness,” says Hirji, adding, “but I didn’t feel offended by the portrayal.”

There is consensus is over the need for a trigger warning. "Even for viewers who saw it coming, the stillbirth scene is incredibly difficult to watch. We’ve heard one report of walkouts during a theatrical screening," wrote Gwynne Watkins for Yahoo! Entertainment in December 2018.

Even those who felt the scene was accurate in its depiction all reported to me that it was extremely difficult to watch. They shut their eyes. They looked away. The stopped the film. They walked out. Should movies put us in such a position?

At least to me, the scene felt less conducive to bringing awareness to the matter, and less about the emotions of those who have survived such traumas, and more pornographic, as if it were done more for the shock value. After all, how many films show a dead infant’s body in its entirety for over three minutes? (Even Mother! and Return To Zero didn't linger so long.) How many films put you in a voyeuristic position to experience the devastation of a newly bereaved mother?

Myself and others in the loss community fully understand that talking about this subject, and including it in popular media, is important. Pregnancy and infant loss are extremely taboo subjects that make people uncomfortable. Yet, they are important to discuss for so many reasons (from understanding how common they are to de-stigmatizing the grief and potential PTSD caused by them). I’m glad that a director as widely respected as Cuarón decided to use this as a key theme in his film. But I hope that in the future, he and other filmmakers will take into account how traumatizing it can be for many of us to relive these experiences when making their final cuts. Much as rape survivors rally against the frequent and often insensitive or careless portrayals of assault, many of us in the loss community would also like to be heard. It really is possible to accurately depict these types of traumas and losses, to make the points you want to make, without dragging us all back into our own worst moments. All it takes is a little extra bit of consideration.

As 33-year-old Jillian Bishop, who was warned about the scene by another loss mom, put it, “There are enough triggers in this world.”

More Like This
14 Free, Printable Birth Plan Templates For Every Kind Of Delivery
The “Tripledemic” Is Scary, But I Feel Less Helpless When I Wear A Mask
Moms, Just Eat The Fruit Dammit
What To Know About Your C-Section Shelf