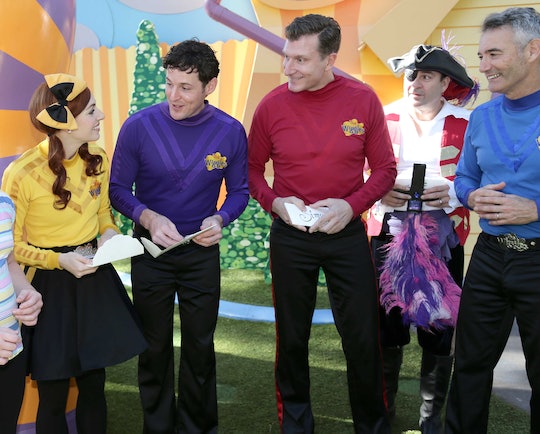 What's the longest car trip you've ever been on? For Anthony Field, best known as the "blue Wiggle," it is a 30-year ride in the (tiny) big red car that brings The Wiggles, a beloved performing troupe, into the auditorium as thousands of little fans cheer and jump up and down. The group has been around so long that many who grew up worshipping the original four Wiggles in their ~signature~ turtlenecks in the '90s — yellow, purple, blue, red — now take their own children to Wiggles concerts. As spud-hands bop on spud-hands during the Wiggles classic "Hot Potato, Hot Potato," you can see it has all really come full circle. "I’ve just loved every day at work," Field tells Romper by phone ahead of The Wiggles U.S. tour (YouTube videos lead me to believe the steering wheel in the big red car is moved to the left-hand seat for U.S. shows, very conscientious), "the shows are so much fun."

It certainly looks like fun — for his services to children's education, Fields was crowned "Bachelor of the Year" by Australia's Cleo magazine in 1999 — but The Wiggles, alongside delighting millions of grommets through the years, have quite the backstory. Charismatic men dancing around in skivvies don't just fall from the skies, you know.

Field met Murray Cook, Greg Page, and Jeff Fatt, the founding members of The Wiggles at university — they were virtually the only men in a class of 180 studying early childhood education. Together, they each found their colors, and toot-toot chugga-chugga-ed along for decades before Cook, Page, and Fatt decided to retire. (The Wiggles 63rd DVD, "Wiggle Pop!" comes out this week on DVD and in iTunes — a lot of wiggling indeed.)

Despite his experience with back-pain and depression, both explored in his book How I Got My Wiggle Back: A Memoir of Healing, Field didn't want to call it quits, so, in 2012, the new yellow, purple, and red Wiggles were introduced to viewers. Notably, the yellow Wiggle, Emma Watkins, became the first female in the band's history. "She’s never worn a pair of pants in her life, and when she came out in a dress, we got so much flack," recalls Field, "but that’s actually her. She dresses with bows." Beyond the initial backlash, Emma Wiggle became the biggest thing to ever happen to The Wiggles.

We’ve had lots of little boys turn up in the full Emma outfit, bows in their hair, dressed like Emma.

"If you look in the audience, 80 percent of the audience are dressed like Emma," Field says, and it's worth noting that my 3-year-old niece is a ride-or-die Emma Wiggle fan: Emma's popularity cannot be understated — it crosses all demographics, cuts through all ages. "We’ve had lots of little boys turn up in the full Emma outfit, bows in their hair, dressed like Emma," says Field. On a peruse of YouTube videos, you can see little boys cutting up the rug in yellow Emma dresses, dads wearing Emma bows on their heads.

In other words, Field knew what he was doing when he pulled Watkins up from the bench. "I asked her because, male or female, she’s so talented, she’s a great communicator, she speaks in sign language," he could go on.

The magnetic pull of Emma Wiggle's onstage persona led Watkins and other new Wiggle Lachy Gillespie (turtleneck: purple) to at first hide their burgeoning relationship — they later married — then try to keep their separation under wraps earlier this year. When news of the separation broke, it was the biggest thing to happen to Australia music since Olivia Newton John and John Farnham performing a duet at the Sydney Olympics, inspiring coverage like "The Truth About The Yellow And Purple Wiggles' Split." (Don't worry, they are still very close.)

Field understood better than anyone the pressures they were under. He has been an advocate for mental illness awareness, and of seeking treatment for children and adults alike.

"One of my children really... couldn’t walk down the street for fear of dogs and we took her to a child psychologist and she was brilliant, really helped her get over that fear," he says, lauding the work specialists do. "We were at our wits’ end."

If you explain to your children that adults make mistakes, that’s less pressure on them to be perfect.

Experts have documented the "decline of play" and rise of mental health disorders in children, and Field is helping on both sides of the equation. Wiggles shows are highly interactive, affirming, a bevy of characters and songs and colors. He is also willing to share his experiences and help parents understand how they might help their children through difficult periods.

"I just think you’d be better off talking to the parents and not the children about [anxiety and depression]," he tells me. "Where parents are listening to their children and celebrating who they are, not trying to force [anything]," situational depression fades, he says. In fact, this was the key finding in a recent experimental program at Yale University offering child- or parent-focused interventions for childhood anxiety.

"I think parents are the realest pressures on children, so if you explain to your children that adults make mistakes, that’s less pressure on them to be perfect," Field says.

Across years of pretending to eat in that red car, Field has above all modeled the change want to see in the world, as we say. "I think there’s a real need for adult men being involved," Field says, whether in a turtle neck or pirate hat, or whatnot. "As a father, you really should be in there changing nappies and being as big a part of the child’s world as the mum."

Thumbs up to that.

Wiggle Pop! a tribute to some of The Wiggles’ favorite Pop, Country and Folk artists, is out now from iTunes and other music retailers.

More Like This
Tips to Beat Jet Lag, For You & Your Kids
The Best Travel Tips For Solo Parenting
Winter Travel Tips For Families
Julia Fox’s Apartment Tour Is Peak Mom Realness
What Parents Are Talking About — Delivered Straight To Your Inbox