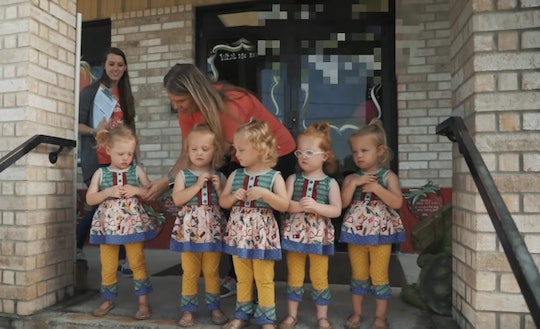 OMG, The Busby Quints Just Had Their First Day Of Pre-K

With back to school season finally here, practically everyone is headed back to school — including the stars of some pretty popular reality shows. It seems like the stars of TLC's OutDaughtered, the Busby quints, are always celebrating some kind of important life event on camera. But last week, they celebrated something very special and topical to this season off camera — the Busby quints had their first day of pre-school. And this really could not be any more exciting for fans of the show.

The third season of OutDaughtered is currently airing on TLC, and on the show, fans have watched as all five of the Busby quints, their older sister, Blayke, and parents Adam and Danielle Busby, celebrate holidays, experience potty training for the first time, and make some big messes, according to Country Living. But as fans are watching the new episodes of the show as they air, they are also missing some very important events going on in the Busby quints' lives — like their first day of pre-kindergarten. Although the show might be a little behind on the current events in their lives, Adam was there to capture this very exciting moment on his own personal camera — which he thankfully posted to his YouTube channel last week.

In the video, all five of the quints — Olivia, Ava, Hazel, Parker, and Riley — can be seen getting ready for their first day of school. This involved Danielle packing a change of clothes for all of the girls, getting them dressed in the cutest matching outfits, and getting them in the car in time for school.

If other moms thought their first day of school was hectic with their children, then the Busby quints might put them to shame.

But, this video might have some fans confused — especially since fans have watched the quints already attend school on this current season of OutDaughtered. But in the video, Adam explained what is different about this school year from the previous years. Adam said:

Today is the first day of pre-school for the quints. So they've been going to this school for a while, but this is actually the age where they officially start pre-k. They actually do a rotation now so, this school they go to — they're really good about their teaching technique and what they do to keep the girls engaged all day long.

Although the quints are only three and can only learn so much at that age, Adam revealed that their pre-school program allows the girls to be engaged throughout the day with activities that teach them about "math, science, social studies, and all that stuff."

It really does feel like the Busby quints were born just yesterday. When the quints were born in April 2015, they made national news for being the first all female quintuplets born in the United States and only weighed two pounds at the time, according to NBC News. But, fans have followed along with their journey through the family's blog, It's A Buzz World, and through episodes of OutDaughtered and have been able to see how much the quints have grown since then.

Even though fans were able to see the quints' first official day of school on YouTube it is possible that they might relive this big day on an episode of OutDaughtered in the near future. In an interview with USA Today last month, Danielle said that they do have a filming schedule which means that cameras don't film the family 24/7 — although that filming schedule is just a little unclear. "It's definitely different when you go places and have a film crew around, but when we're at home...we haven't really known anything different," Danielle said.

It's so bittersweet to see the quints enter their first day of pre-k because they won't be this little for much longer. Next up? Kindergarten.