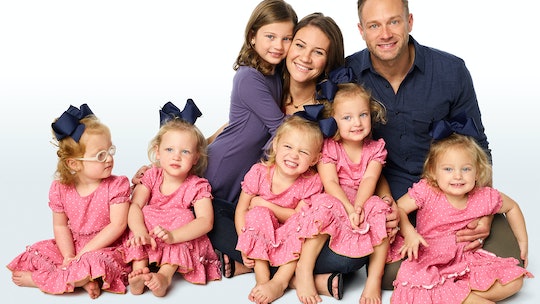 Aww, The Busby Quints Are Coming Into Their Personalities & They're All Adorable

The Busby family is back with an all-new season of OutDaughtered, and it looks like the girls are growing up right before our eyes. As always, Adam and Danielle have their hands full with their all-female quintuplets — Ava, Olivia, Riley, Parker and Hazel — as well as their eldest daughter, Blayke. And now that the TLC reality series is diving into its fifth season, everyone is wondering about the Busby quints' personalities on OutDaughtered and how much they've changed since surpassing the "terrible twos."

In an interview with Us Weekly, Adam and Danielle teased what's to come in OutDaughtered Season 5. "There has been some interesting stuff that has happened within our house that we had to figure out through the season and it's still ongoing," Adam said. The father-of-six also added that the girls are beginning to learn more about themselves.

Danielle also revealed that the quints' evolving personalities has its challenges. "We always say it's never easier, it's just very different. The hard phases just change," she said, adding that they now have six different voices and opinions that are dying to be heard.

"The answer is answering one at a time when they're all coming at you. But they're 'three-nagers', too," Danielle continued. "So they want what they want and they're all understanding what they like and what they don't like. So it's the battle of who wins, and it's usually not me."

Although the Busby quints' personal identities are still under development, TLC has already found ways to help viewers tell each girl apart. According to the network's official website, Parker is known as the "leader of the pack." Riley is the "cutest little troublemaker." Hazel is the "fiery redhead who will melt your heart." Ava is the "mama's girl with a sweet little grin." And last but certainly not least, Olivia is the "goofball who will keep you laughing."

Most of the girls' TLC profiles seemed to stay in line with the network's introductory video for Season 3. In the clip, Danielle and Adam described Parker as a "reserved" and "serious" girl who also loved her bed — TBH, same. Meanwhile, the Busby parents called Ava "super sweet" and crowned Olivia as the "comedian of the house". They then explained that Hazel is often in her own happy bubble.

That said, the mini bios provided by TLC seemed to downplay Riley's loud personality. In the video, Adam stated, "The whole house revolves around Riley. She thinks everything is about her and she will not back down. It is Riley's world. She is bossy, she is the toughest, and she will pick a fight."

While Adam and Danielle also added that Riley was smart, it doesn't look like that much has changed when it comes to her strong attitude. In a recent interview with Good Morning America, Keke Palmer asked which quint was the bossiest. Only this time, Blayke answered.

The quints may not be babies anymore, but they're growing into big kids with full-fledged personalities. And with five "threenagers" living under one roof, things are bound to get a little wild in the upcoming episodes of OutDaughtered. So stay tuned.