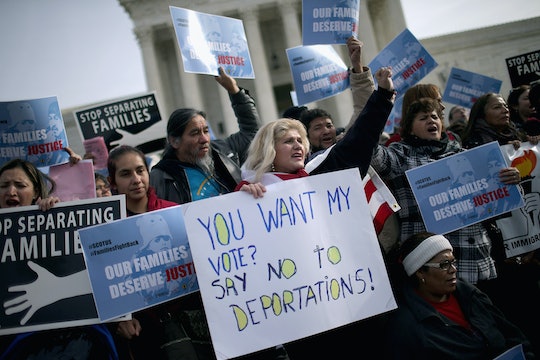 The Supreme Court blog reported early Tuesday morning that the Court agreed to review President Barack Obama’s immigration plan. By deciding to take up the case, the high court has effectively guaranteed that immigration will be a marquee issue in the 2016 elections — and likely the biggest news to come out of the Supreme Court this year. But the cases the Supreme Court declined to hear make nearly as powerful a statement. The justices opted against reviewing a handful of cases on health care, immigration, and reproductive rights, and those choices should send a strong message to activists and politicians who have spoken out on those issues.

In the cases the justices declined to hear, they argued that the lower court made the right decision or that an earlier appeals ruling should go unaltered. Either way, these decisions could (and should) have an impact on the debates concerning healthcare and abortion rights in the future.

The justices decided to consider a challenge filed by some 26 states to Obama’s sweeping plan to shield as many as 5 million undocumented immigrants from deportation. In 2014, Obama signed an executive order allowing immigrants who have lived in the country for 5 years or more to apply for work permits as long as they hadn’t committed any other crimes. In addition, the order halted deportation for those who were brought into the U.S. illegally as children.

The Supreme Court’s decision to hear the massive immigration case is actually good news for the White House and for immigration advocates. After a federal court ruled against the initiative, the estimated timeline for resolution on immigration could have extended well past Obama’s last day in office, the Washington Post reported. And it means a resolution is soon to come for the 5 million undocumented immigrants who had been caught in legal limbo between the states and the federal government. ABC News reported that the case will be argued in April and the court will issue a decision in late June, just as both parties convene to nominate candidates for the 2016 presidential election.

But the issues that the justices decided against reviewing this year are just as telling when it comes to what should be important in this election season and in U.S. culture. By not entertaining challenges to these three cases, the Supreme Court upheld a lower court decision and ensured that some hot-button perspectives would simply not get much of a platform this year.

Yet Another Challenge To The Affordable Care Act

Opponents of Obama’s signature health care plan were dealt a blow when the court refused to take up a constitutional challenge to Obamacare. Bloomberg News reported that the latest case called into question the legislative procedures lawmakers used to pass the initiative. The petitioners argued that legislators had violated a constitutional requirement that legislation designed to raise revenue should originate in the House before proceeding to the Senate.

The court declined to hear the case, all but ensuring the ACA will remain intact through the November presidential and congressional elections.

Arkansas’s Ban On Abortions After 12 Weeks

The court rejected a petition to review a 2013 Arkansas law banning abortions after the 12th week, which is the week a heartbeat is usually detected. According to Bloomberg News, a federal appeals court ruled that the law violated the Supreme Court’s earlier decision affirming abortion rights. The 1992 Planned Parenthood v. Casey decision said states can’t place an “undue burden” on a woman’s right to end a pregnancy before the fetus reaches viability. By declining the case, the justices upheld the federal court ruling and declined to re-argue its 1992 decision.

It was an important blow to those who believe a woman's right to choose should be subject to timelines, waiting periods, and unnecessary pressure.

The court may be examining Obama’s sweeping immigration plan this year, but it declined to take up a lawsuit filed by Arizona Sheriff Joe Arpaio challenging the President’s actions. Talking Points Memo reported that Arpaio, known for his anti-immigrant sentiments, had asked the court to block two programs that shield undocumented immigrants who come to the country as children (or who are parents of permanent residents) from deportation for a certain time.

Arpaio argued that the programs were a burden for law enforcement, as more police hours and jail resources had to be spent arresting undocumented immigrants. While the court may be willing to entertain arguments about Obama’s constitutional authority to issue his immigration plan, this decision means the argument that immigrants are somehow inherently more criminal than others in the U.S. simply won’t be on the table.

SCOTUS' rejection of these cases should send a clear message to those who want to deport immigrants or those who believe a woman's right to choose should be restricted. By not hearing these cases, the Court is allowing those laws to stand, and people who oppose abortion, for example, should take note.