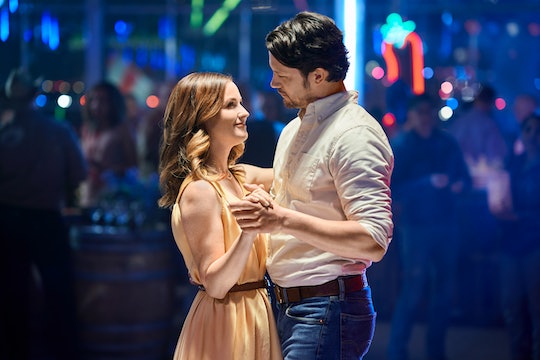 You've Definitely Seen These Hallmark Stars On Your TV Before

Hallmark has an early Mother's Day gift for you because an all-new original movie A Feeling Of Home premieres Saturday, May 11. It's about Abby, an entrepreneur who returns to the Texas town where she grew up to take care of her father and his ranch, while also trying to convince a potential financial backer of her company that she's originally from New England. Now if you're curious about the cast of A Feeling Of Home I can assure you you've probably seen these actors before.

You might know the movie's lead actress, Jonna Walsh, from her roles on the Freeform series Baby Daddy or The Fosters or the movie Couples Retreat. She grew up in Los Angeles, but she's no stranger to working with animals and apparently worked on a farm when she was a kid. "I told my mom [about the movie] and my mom was like 'this is you, you grew up smelling like a goat,'" she said in a behind-the-scenes interview on set of A Feeling Of Home. "On this movie we get to work with so many animals and that's my favorite part," she said. So it looks like the real-life Walsh is a little more comfortable with the country-life thing than maybe her character is.

Abby is not so keen on being home, but her father Wes (Robby Benson) would like to keep her there because he thinks his daughter belongs with her high school sweetheart Ryan (Nathan Dean Parsons). Wes likes Ryan so much that he made him the new manager of the ranch, so it's not going to be easy for Abby to get away from him or any lingering feelings.

For Parsons, playing the character of Ryan came naturally for a completely different reason than Walsh. "What excites me about this project is being able to be from Texas. I grew up in Texas," he said in the interview on set. "It's been really fun to work with animals and talk about barbecue." It's been a long time since he's been back there. You might know Parsons as Jackson Kenner on The Originals or Max Evans on the hit new CW show Roswell, New Mexico, which will return to the network for Season 2.

Parsons knows that Walsh's character Abby will have a harder time leaving Texas than she thinks. Everything is big there, after all, and it's hard not to fall in love with everything about the state, no matter who your high school sweetheart is. "I would describe this movie as primarily a love story," he said. "But a love story not only for two people but between a place and a family and a culture."

It's one thing to leave home again. It's quite another to leave home and the possible love of your life. Also, that lie she's telling about her hometown sounds absolutely exhausting, but that's just me. You have to watch A Feeling Of Home to see where Abby ends up. But, I have to say she and Texas seem to get along pretty darn well.