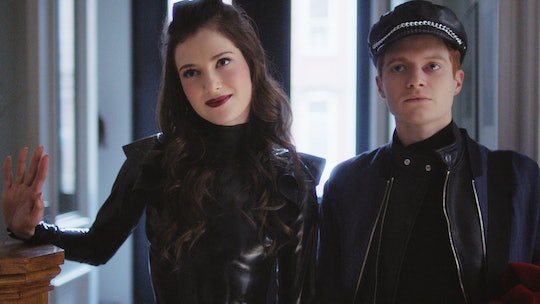 According to Netflix, Bonding focuses on a grad student — and seasoned dominatrix — named Tiff (Levin) and her gay best friend, Pete (Schannell). It's a given from her graduate student label that Tiff is in need of some cash. Meanwhile, Pete is an aspiring stand-up comic — if he ever musters up the courage to get on stage — who is also struggling financially. So to make ends meet in New York City, Tiff and Pete decide to open an S&M business. And no, it's not just the chains and whips that will excite you in this comedy. As Tiff and Pete navigate the ins and outs of their new business, the duo must also redefine their professional relationship while discovering who they are on their own.

The Bonding cast is filled with a number of delightful characters, but Levin and Scannell clearly take the lead. Per Scannell's iMDB page, the actor has been involved in a few projects since 2004. Most notably, he was cast as Heather Duke in the Heathers reboot, though the project never quite took off. But luckily for us, Scannell moved on to Bonding.

As it turns out, the 29-year-old has more in common with Pete than you might think. Both are stand-up comedians. In an interview with TodayTix, Scannell shared a few details about his stand-up background.

"I’m originally from Indiana, went to college in Chicago, and have lived in LA for about four years," Scannell said. "I started out with improv and sketch in school and in Chicago, and started doing stand-up when I got to LA. There’s a really great scene here ranging from the clubs to shows in bars, backyards, and everywhere in between. This city is bursting with comedy."

Scannell's onscreen other half, Levin, has been in the acting business for an even shorter period of time. According to iMDB, Levin has been working since 2010, and was cast in Palo Alto, starring Emma Roberts, and Red Band Society, headlined by Octavia Spencer. Bonding is Levin's first major leading role.

Speaking with Bustle, Levin revealed that there were a few small challenges that she faced when getting into her character on Bonding — and understandably so.

Aside from newcomers Scannell and Levin, the remaining Bonding cast members feature a number of familiar faces. D'Arcy Carden, who is known for her role as Janet on The Good Place, is Daphne in Bonding. Meanwhile, Escape at Dannemora's Micah Scott plays Doug, Tiff's love interest, and Kevin Kane, who plays Tiff's professor, has appeared on Inside Amy Schumer numerous times.

Bonding is now available to stream on Netflix.