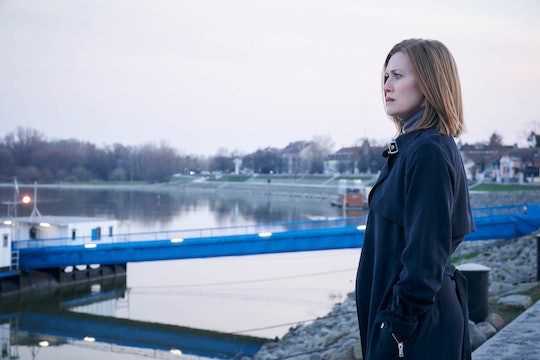 You've Seen The Stars Of 'Hanna' Together On Screen Before

Amazon Prime's Hanna adapts the dark 2011 film into an eight-episode TV series, but viewers tuning in may be wondering where they've seen the cast of Hanna before. The foes at the center of the story actually have a deep and beloved history on another cult series which certain TV fans know all too well. Mireille Enos and Joel Kinnaman previously starred together on The Killing, a tense, three-season AMC crime drama which was canceled and then revived by Netflix for a fourth and final season. On that show, the pair were partners investigating murders, but Hanna positions them as enemies.

More Like This
If Your Kid Can’t Get Enough Dinosaurs, They’ll Love These 20 Shows
I *Literally* Could Not Be More Excited For The Parks & Rec Book
New Disney Junior Show Aims To Help Kids “Navigate Real-World Issues Of Racial Injustice”
Everything There Is To Know About The Friends Reunion

Kinnaman plays Erik Heller, an ex-CIA operative and apparent father to the titular character, a teenage girl who he brought to the woods as a baby to raise in seclusion. He's also trained her to be a highly skilled assassin for reasons that remain mysterious. Enos, meanwhile, plays Marissa Wiegler, a senior CIA agent tasked with silently eliminating the both of them. Hanna herself is played by a relative newcomer on the scene named Esme Creed-Miles. She has a few indie films under her belt, but Hanna is poised to be a breakout role for her, much like it was for a young Saoirse Ronan, who originated the role in the film.

The Killing's critical success launched both Enos and Kinnaman's career into the stratosphere. After earning both an Emmy and a Golden Globe nomination for her work on The Killing, Enos went on to star in ABC's short-lived but slickly produced series The Catch, which boasted a coveted Shondaland time-slot. (The show was executive produced by Shonda Rhimes.) Hanna is her first series regular role since The Catch, which aired from 2016-2017. Prior to The Killing, Enos was best known for playing twins Kathy and JoDean Marquart on HBO's polygamist family drama Big Love. She also earned a Tony Award nomination for playing Honey in the 2005 Broadway revival of Who's Afraid of Virginia Woolf? opposite Kathleen Turner, Bill Irwin, and Stranger Things' David Harbour.

Kinnaman went on to play Will Conway, a young, social media-savvy upstart of the Republican party who runs against Frank Underwood on Seasons 4 and 5 of House of Cards. In 2018, he was one of several actors playing Takeshi Kovacs, the lead character in Netflix's complex sci-fi series Altered Carbon. The show takes place 300 years in the future, where human consciousness is stored on a device that can be plugged into different "sleeves" or synthetic bodies. This allowed for Kinnaman's character to be recast in Season 2 with little disruption to the storyline.

Amazon Prime is clearly banking on Hanna being a buzzy show for them; the platform aired a teaser trailer for the series during the 2019 Super Bowl and released the pilot for a special 24-hour limited viewing window to coincide with the Super Bowl teaser. The series was created by the film's co-writer David Farr, and you can also watch the original film on Amazon Prime, along with the series, which is now streaming.