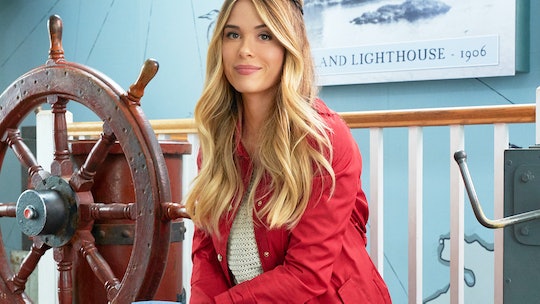 Fall In Love With The 'Sailing Into Love' Cast Hook, Line, And Sinker

Splash into summer with Hallmark Channel's latest original movie, Sailing into Love, which premieres on Saturday, May 17, at 8 p.m. ET. The love story is one of five movies in the network's Countdown to Summer series, which airs throughout the month of May. And if you're a little overwhelmed by all the new faces, don't worry. The cast of Sailing into Love features two leading actors that you've probably seen before.

More Like This
What To Stream Right Now For Kids Who Love History
Peppa Pig Is Going Camping In A New Live Show & You’re Invited!
Here Are 25 Shows You Can Feel Good About Your 2-Year-Old Watching
Everything You Need To Know About The Rugrats Reboot

Starring Leah Renee as Claire Richards and Chris McNally as Tom Hastings, Sailing into Love tells a little tale of love in the fictional seaside town of Willow Bay. The Hallmark Channel film follows Claire, a high school biology teacher, who returns to the small town for the summer. Claire plans on attending three weddings all within one month to get another shot at love with her ex, Jason (Gary Garneau).

During her stay in Willow Bay, Claire takes a group of students to a nearby island called Blue Island as part of her Summer Enrichment Biology class. There she discovers that her beloved island may be sold to a resort developer, so she promises to save it. Claire finds an ally in Tom, a charter boat captain, and in time, she finds herself helplessly in love with him. But, here's the catch — Tom lives for adventure and never stays in one place for too long. But will Claire and Tom find love or will the captain answer the call of the sea? You'll have to watch to find out.

Chances are, you might know Sailing into Love's lead actress. Per Renee's iMDB page, the Canadian native has been acting since she was 11 years old. She voiced Beaver in the classic children's cartoon, Franklin, and then went on to play Bunny Alice in NBC's The Playboy Club, Maggie Bronson in the comedy Satisfaction, and Claire Benson in A Snow Capped Christmas, opposite Niall Matter. The actress has also been in a few smaller roles, including Degrassi: The Next Generation and Grimm.

From the looks of Renee's Instagram page, when she's not busy with her acting career, she's spending time with her family. She is married to fellow actor, Nick Zano, who is best known for his role as Nate Heywood in DC's Legends of Tomorrow. Together, Renee and Zano have a 2-year-old son and a 1-year-old daughter. And yes, their family is adorable.

McNally hasn't been in the entertainment industry quite as long as his Sailing into Love co-star, but you're probably going to see a lot more of him in the future. According to his iMDB profile, McNally has guest starred in hit television shows like Fox's Lucifer, TNT's Falling Skies, The CW's Supernatural, and Netflix's Altered Carbon. He is also a Hallmark Channel superstar, nabbing roles like Nate in The Sweetest Heart and Jesse in A Winter Princess. He is also set to appear as Lucas Bouchard in upcoming episodes of Hallmark Channel's drama series, When Calls the Heart.

Off-camera, McNally seems to have a similar sense of adventure to his Sailing into Love alter ago. However, per the McNally's Instagram page, it seems that the actor's preferred companions are his two rescue dogs. Seriously, this guy's feed is filled with happy pups and TBH, I'm not complaining.

While McNally and Renee have had incredible careers on their own, it's their onscreen chemistry that will bring Sailing into Love to uncharted waters. Speaking with Hallmark Channel, McNally gushed that working with Renee has been "really great" and Renee echoed her co-star's statement.

"It's been really easy to have that good chemistry with him because really just a genuinely nice guy. He's actually really shy and an introvert and those are my favorite kind of people," Renee said.

So if you're ready to see Claire and Tom fall in love, then remember to watch Sailing into Love when it premieres Saturday, May 17, on Hallmark Channel.