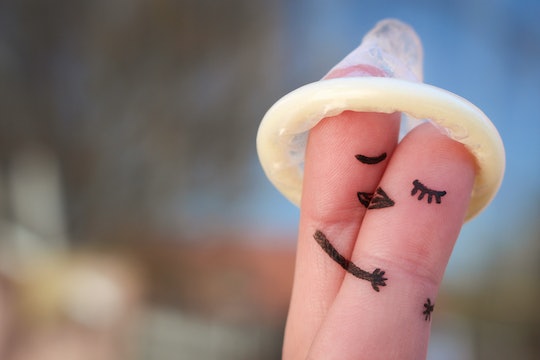 I'm a firm believer that it's OK to break the rules sometimes, and even most of the time. But there are a few decrees I don't mess with, including but certainly not limited to: always clean behind your ears, never leave bread crumbs in your nana's red sauce, and use condoms the right way all the time, every time. That latter standard, however, is apparently tricky for some people. Recently, the U.S. Centers for Disease Control and Prevention (CDC) warned people to not wash or reuse condoms. And, well, this is why comprehensive sex education is so important.

You'd think that something as seemingly obvious as "don't wash or reuse condoms" wouldn't need to be said, but the United States has a poor sex education system that is putting children's — and adults' — physical and mental health at risk. But knowing the reason behind the CDC's recent warning doesn't lessen my indignation.

The CDC issued the warning to the general public on one of its social media accounts late last month, but it hadn't made the news rounds until the last few days. The public health agency's initial tweet, posted July 23, read: "We say it because people do it: Don't wash or reuse #condoms! Use a fresh one for each #sex act," according to Newsweek.

How many people, exactly, are washing or reusing their condoms? Between 1.4 and 3.3 percent have reported doing so, according to a 2011 study published in the journal Sexual Health.

And the CDC's reminder can't be stressed enough: Never, ever, ever wash or reuse condoms. Ever.

Incorrect use, such as reusing a condom or using more than one at a time, diminishes the protective effect of condoms by leading to condom breakage, slippage, or leakage.

Condoms are one of the most effective — and relatively inexpensive — ways to protect against pregnancy and sexually transmitted infections. When used the right way, condoms can prevent pregnancy 98 percent of the time, according to Healthline (although human error places that rate closer to 85 percent, which is still far more effective than not using a condom). Research has found similar rates for effectiveness of condoms in guarding against certain STIs, such as HIV, gonorrhea, and the human papillomavirus — otherwise known as HPV.

But when you use condoms the wrong way — you know, like washing and reusing them — you diminish their quality and therefore their effectiveness.

Dr. Alyssa Dweck, a board-certified OB-GYN and author of The Complete A to Z for your V, told BuzzFeed News:

There's no way you can confirm the integrity of the condom for protection against pregnancy once it has been used, removed, washed, and replaced. You should use the condom in the way the manufacturer has intended and tested — if you don’t, you cannot rely on the condom anymore to do those duties.

In other words, throw away every condom that you use, even if you don't ejaculate into it. The mere friction involved in penetrative sex can cause condoms to break down, which in turn, causes them to become less protective.

So what does this have to do with the country's poor sex education system? Everything.

Although some states advocate for comprehensive, medically accurate sex ed, many states still promote abstinence-only and abstinence-only-until-marriage programs, which research has proven just doesn't work. Abstinence-only education not only fails to teach kids how to use condoms properly, but it does nothing to actually deter or delay sexual activity, according to Glamour. In fact, Advocates for Youth found that youth are more likely to report emotional distress, lower self-esteem, drug use, issues at school, and sexually indiscriminate behaviors when they lack parental acceptance and communication when it comes to sex.