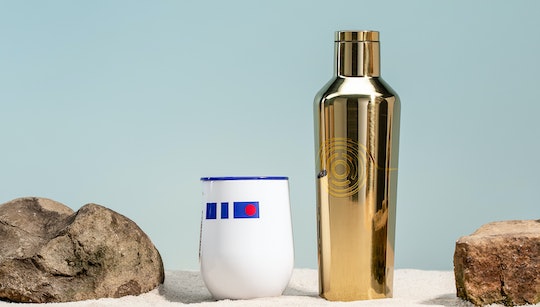 The Corkcicle 'Star Wars' Collection Is So Sleek & Perfect

Most Star Wars fans can tell you exactly where they were the moment they first beheld George Lucas’ trilogy. Remarkably, 43 years after the blockbuster's debut, its legion of fans continues to grow. From the people who camp outside theaters to be first to see the latest episodes, to young Padawans anxiously counting down the days until the release of the Disney+ spin-off, Mandalorian, the Corkcicle Star Wars collection. can keep them hydrated while they wait.

Team Rebel Alliance? Show your dark side with pride by sipping from Corkcicle’s Darth Vader tumbler. More of an R2D2 fan? You’ll appreciate the colorblock detailing of the stemless cup that looks like the little handheld robot, albeit full of your favorite beverage of choice.

Joining the company’s other collections, like Corkcicle’s Rifle Paper Co. floral sets and late artist Jean-Michel Basquiat’s contemporary painting series, the Star Wars collection takes the company’s triple-insulated technology and makes it space opera-ready. Each product is designed to keep either cool drinks chilled for nine-plus hours, or hot drinks warm for three. So whether you’re sipping cocoa outside the cinema before the next Star Wars release, or dipping cookies in milk on your couch while binging Mandalorian’s Season 2, Corkcicle has an intergalactic cup for you.