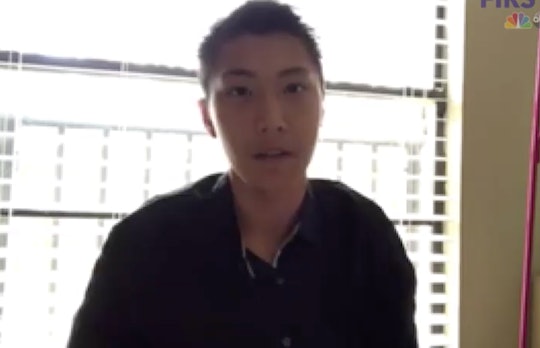 There is nothing about the February 14 mass shooting at the Marjory Stoneman Douglas High School in Parkland, Florida, that isn't both completely heartbreaking and entirely infuriating. Once again, a gunman was able to enter a school with the specific intention of killing as many innocent people as possible, and once again, there are people trying to argue that little could have been done to prevent it, or to keep it from happening again. But while the Parkland shooting is representative of a much bigger issue, it's also important not to overlook the individual victims. On Monday, the cousin of a Parkland victim shared an emotional Facebook video, and it was a heart-wrenching tribute to a teen whose kindness and bravery literally saved lives.

Earlier this week, Jacksonville Florida First Coast News reporter Lindsey Boetsch posted a video to Facebook sent to her by 16-year-old Aaron Chen, whose cousin, 15-year-old Peter Wang, was killed in the Parkland shooting. In the post caption, Boetsch explained that she'd been in touch with Chen following the loss of his cousin, and that he'd allowed her to share the video to give the public "a glimpse of Peter, through his eyes." The result is a moving tribute to Wang, who was shot and killed "while holding a school door open so classmates and faculty could escape," according to USA Today. But while Wang's selfless action is astounding, Chen said that it was far from being the only detail he should be remembered for: the grieving teen said Wang was "the best brother, cousin, son, and friend, anyone could ever ask for and more."

In the video, Chen explained that while Wang was actually a year younger than him, he was someone he looked up to as a best friend, a mentor, and a protector. Chen explained that as a child, he moved from China to the United States, and that it was Wang who helped him make it through that incredibly challenging adjustment. He said,

Being a new kid sucks, but imagine being a new kid who doesn’t speak English. I would’ve died if it wasn’t for Peter. He made sure I wasn’t bullied at our first school. Even though he was a whole year younger than me, he protected me and I couldn’t protect him during the shooting.

Chen also explained that he and Wang had birthdays only two days apart, and that they "shared everything" and "never fought," even spending a summer together when they were sent to live with a teacher — a time when they often ended up wearing matching clothes. But when they went back to living apart, Chen said they still visited each other everyday, and that they'd spend their days playing with their Power Ranger figurines.

Chen said he'd always felt "so certain that Peter was going to be there, and everything was going to be OK — so much so that Chen even hoped he would be the one to die first so that he'd literally never have to experience existing in the world without his best friend. But now, 16-year-old Chen is left to spend the rest of his life without him, a fact that makes him both emotional and angry. And to anyone still arguing that pushing for gun safety is unnecessary, Chen had a specific message: "Don't you dare come up to me and tell me there's no such thing as gun violence ... We are not going to let this happen to anyone, anywhere. Not again."

A day after Chen's video went live, hundreds of people gathered to say goodbye to Wang as he was laid to rest in Fort Lauderdale, according to People. A cadet in the U.S. Army Junior Reserve Officers’ Training Corps (JROTC), Wang was buried in his uniform — the same one he'd been wearing when he was shot at school — and though Wang was too young to fulfill his dream of one day serving in the military, on Tuesday, the U.S. Military Academy at West Point announced Wang had earned a posthumous acceptance to the school's class of 2025 for his "heroic actions on Feb. 14, 2018," according to USA Today. He was also given the Army Medal of Heroism, the highest honor for Reserve Officers’ Training Corps cadets, according to The New York Post, and outside the funeral home, a dozen veterans held up American flags in his memory.

Yet while clearly well-deserved, Wang's hero's send-off of course did little to ease the pain his loved ones will forever feel over his loss. Speaking during her son's service, according to The New York Post, Wang's mother, Hui Wang, said,

I watched you walking to school on February 14. Now My body is bleeding in unbearable pain. Baby, am I in a nightmare? This is unbearable. Baby, hold my hand, reach me. Baby, I’m stuck in this nightmare. Lead the way out.

Among the 17 Parkland shooting victims, two of Wang's fellow JROTC cadets were also killed — 14-year-old Alaina Petty, who was laid to rest Monday, and 14-year-old Martin Duque, whose memorial service will take place Saturday, according to People. And like Chen, many of their classmates are taking steps to ensure that none of the victims died in vain.

In addition to ensuring that the memories of their classmates and teachers live on, Parkdale survivors are now speaking out for gun safety legislation, organizing rallies — including the March For Our Lives on March 24 — and pushing for change. So while Wang and his classmates should never have been put in a position where going to school meant risking their lives, it's clear that they will leave behind an invaluable legacy — and hopefully one that will include being the catalyst for long-overdue political action to ensure that mass school shootings can finally be stopped.