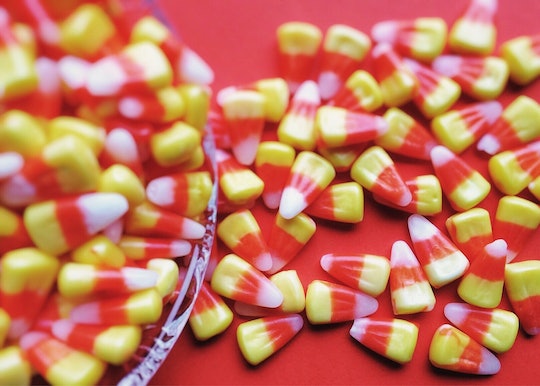 The Crazy & Weird Reason Daylight Saving Time Doesn't End On Halloween (Hint: It's All About The Candy)

Does it seem like the end of daylight saving time used to come earlier in the year? Well, you're right. It used to fall on the last Sunday of October, just prior to Halloween night. The crazy and weird reason daylight saving time doesn't end on Halloween any longer will blow your mind: It looks like candy corn and fun-sized Snickers bars were involved and potentially have power to make new laws.

In essence, lobbying from the candy industry was possibly a huge reason for the extension of daylight saving time(DST), according to Business Insider. In 2005, a law was passed by President George W. Bush to extend the total DST by four weeks (starting 3 weeks earlier and one week later, pushing the time we fall back to November). CNN reports that it was a potential solution to energy problems, but because evidence of energy savings is somewhat inconclusive, theories about the alternative reason for this change abound. One potential explanation: the strangely powerful candy lobby helped enact this new law.

As it turns out, the lost hour of daylight from the October end to daylight saving time presented an issue for candy manufacturers. An extra hour of daylight on Halloween may have meant an increase in candy sales, as the trick-or-treaters stayed out longer, as noted by Michael Downing, author of Spring Forward: The Annual Madness of Daylight Saving Time in The New York Times. In fact, some candy companies lobbied for decades to push back the end of daylight saving time, allegedly even putting little candy-filled pumpkins on every senator's chair in 1986, according to Mental Floss. (The legitimacy of the pumpkin story has been debated, but it's a fun mental image, right?)

Although it sounds more nuts than an Almond Joy bar, there's a lot to be said for the candy lobby theory. Candy is a big business: The U.S. confectionary industry raked in $33.6 billion in sales around 2014, and the industry is expected to hit nearly $40 billion by 2019, according to Candy Industry. And it's no secret that Halloween is a huge time of year for candy manufacturers an distributors.

Halloween alone is expected to generate $2.75 billion in candy sales for 2017, according to the National Confectioners Association (NCA). Everyone in the industry is doubtlessly aware of these massive sales figures. “It’s a fall tradition that Halloween brings fun and enjoyment to neighborhoods across the country, and we know that chocolate and candy are often the centerpiece of Halloween celebrations,” said president and CEO of NCA John Downs on the organization's website. For many Americans, that centerpiece only became more important in the wake of the extended DST.

Granted, not everyone believes the extension of DST was so profit-driven or motivated by corporate interests. There is also a serious child safety factor to consider. In fact, the Halloween Safety Act of 2003 advocated for the extension of DST through the first Sunday of November, presumably to give trick-or-treaters the benefit of additional daylight, according to Congress. There is some validity to this idea, because child pedestrians are twice as likely to be struck and killed by a car on Halloween than any other evening of the year, according to Safe Kids Worldwide. Giving kids the chance to do more trick-or-treating in the daylight would likely increase their visibility to drivers, making the day safer for everyone.

Whether the extension of DST was passed in the interest of child safety — or the influence of Big Candy — it falls in early November now, instead of late October. So when the clocks auto-reset on November 5, remember that your kid's giant bucket of Snickers and Reese's might have some influence over that time change. Those fun-sized treats just might be more powerful than you think.

More Like This
12 Pretty & Yummy Mother’s Day Cocktails
12 Last-Minute Vacation Spots For Memorial Day
It's Not Just Covid: Doctors On Why Everyone's Getting Sick Right Now
Here’s What You Need To Know About That Viral 1960s Baby Formula “Recipe”