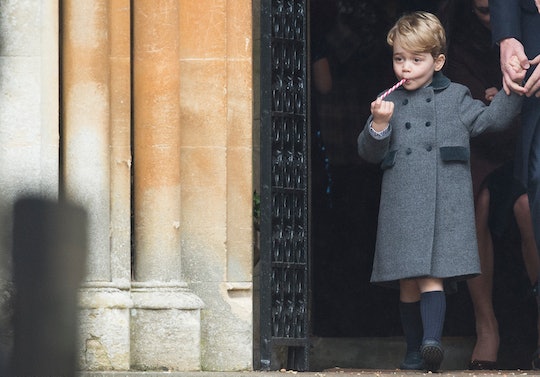 Prince George's Iconic Fashion Was Honored On 'The Crown'

One of the best things about watching The Crown are the little Easter eggs that are sometimes delivered. And Season 3 of the show is no different, especially if you're a big fan of the modern monarchy and the youngest members of the family. You might've missed it, but The Crown gave Prince George a sweet nod and it is one of those meta moments when you realize it's all based on reality and it's sort of amazing.

The 6-year-old prince is, naturally, tied into the story behind The Crown in a myriad of contextual ways. After all, The Crown tells the story of his family, and his own great-grandmother is the main character of the series. The third season of The Crown follows the lives of the royal family, notably Queen Elizabeth II, her husband Prince Philip, and their children Prince Charles, Princess Anne, Prince Andrew, and Prince Edward, from 1964 through to the early 70s. During this time, Prince Edward (the youngest of Queen Elizabeth's four children) was around the same age as Prince George, and it appears the coincidence might not have gone unnoticed by the wardrobe department of the series.

In episode seven, Prince Edward appears to be walking along with the rest of his family wearing a very similar, double breasted coat that was also worn by Prince George in 2016. Don't worry about spoilers, I wouldn't do that to you.

The Earl of Wessex, as Prince Edward is also known, was born in 1964 and this scene takes place around 1969, making his character approximately 5 years old. In this episode of The Crown, the royal family is walking outside of St. Mark's Church in Englefield wearing short pants, long socks, and a grey double breasted coat.

Royal fans will recognize not only the exact Pepa & Co coat worn by Prince George on Christmas Day 2016, but perhaps also the location. St. Mark's Church is close to the home of Prince George's maternal grandparents, Carole and Tony Middleton. This church was also the location of Pippa Middleton's 2017 wedding to financier James Matthews, according to The Sun. And let's never forget that Prince George was a page boy for this wedding, while his little sister Princess Charlotte was a bridesmaid.

This is obviously too many coincidences, don't you think? Not that Prince William or Kate Middleton will see it. The royal family apparently does not watch The Crown, according to The Washington Post, and I can't say I blame them. Other than the cute nod to Prince George, it might simply be too uncomfortable to watch a version of your life play out on television like that.