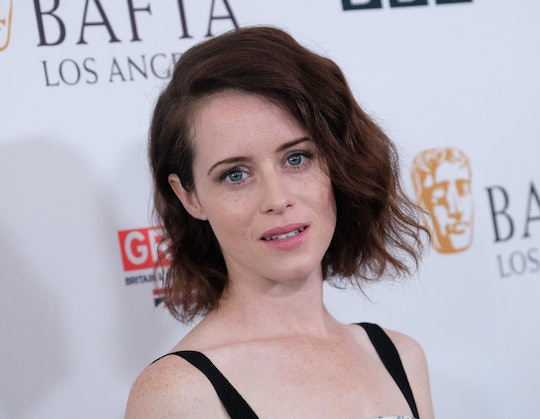 Breastfeeding is one of the many parts of new motherhood that can be a real challenge, even under the best of circumstances. But getting the hang of it isn't the only obstacle: for moms who have to return to work soon after giving birth, the reality of trying to pump on the job can also be overwhelmingly difficult. In a recent interview with British Vogue, The Crown actress Claire Foy said she wasn't able to pump on set after returning to her role only months after giving birth to her daughter, and admitted that it made her feel like she'd made a big mistake.

Foy spoke to the magazine about her breakout role as Queen Elizabeth in the Netflix series, and though it might seem like being a successful, award-winning actress would allow her plenty of mom-friendly on-set accommodations, Foy said that after giving birth to her daughter in 2015, going back to work was incredibly hard. According to The Daily Mail, Foy said,

On the first day of filming, I found myself halfway up a Scottish mountain with engorged boobs and no way of getting down to feed my baby. I had to ring my husband and tell him to give her formula ... as I sat in a Land Rover trying to get my broken breast pump to work, I felt I'd made the worst mistake of my life.

For Foy, landing the role as Queen Elizabeth — one that she won a Golden Globe award for earlier this year — came at a bit of a tricky time. According to The Mirror, Foy was actually five months pregnant when she auditioned for the role, and when filming began, her daughter was 4 months old. But it was too good an opportunity for the actress to pass up, and ultimately, she made the decision to juggle both new motherhood as well as the series. Her failed pumping attempt on the first day of filming though definitely sounds like a pretty heartbreaking way to kick off her new job: Foy told Vogue, "It was like someone had stamped on my heart."

Eventually, Foy said she did figure out a way to continue to pump on set, though in retrospect, it may not have been a choice she'd make again. During a 2016 appearance on The Graham Norton Show, Foy spoke about being a breastfeeding mom while also playing Queen Elizabeth, and said,

I was a lunatic ... Every morning in the makeup chair, I would be there, like a cow, [pumping milk]. And without fail, someone would say, 'someone's phone's going.' No, no, it's just me. I made a lot of milk.

Foy may be able to look back at those days now and find the humor in them, but her experience is actually one that a lot of new mothers can relate to — and it's definitely a struggle. And the irony is that, even though Foy felt like she had to go back to work before she was ready, the fact that she had four months at home with her baby means that her maternity leave was already longer than many moms' in the United States, where the law only guarantees 12 weeks of unpaid maternity leave — and only to certain employees. What that actually means is that far too many moms don't get nearly enough time with their little ones after giving birth before they have to go back to work. According to The Washington Post, a 2015 report analyzing data from the Department of Labor found that as many as 1 in 4 new mothers return to work within two weeks of giving birth — and that only 13 percent of workers in the United States actually have access to any paid leave at all.

That's a big problem, because although it might be important from a financial perspective for women to return to the workplace as soon as possible, it's not good for women or their babies. Women who return to work too soon are more likely to struggle with their mental health, for example, and are ultimately less likely to continue breastfeeding. And let's not overlook the fact that it takes a long time to physically recover from giving birth, too: an Australian study published in the International Journal of Obstetrics and Gynecology in 2000 found that even at six or seven months postpartum, many women still experience exhaustion, back pain, urinary incontinence, sexual problems, and perineal pain linked to their delivery.

Foy may have been able to figure out a reasonably supportive system that helped her continue to pump while also starring in a hit series, but unfortunately, that's not always the case for many women. By opening up about her experience though, Foy has used her platform to draw more attention to the reality that working moms face, and that's a big deal. While it's not exactly a typical experience to be sitting in a Land Rover on a film set in Scotland with engorged breasts, the feeling Foy felt — that she had made a mistake, and was letting down her baby — is all too common. And it illustrates a frustrating truth: when new moms aren't supported, they're forced to carry unnecessary burdens of guilt at a time when they're already struggling to live up to all the other expectations placed upon them.

Foy's Vogue interview may not have been intended to be a PSA about the need for comprehensive, extended maternity leave, but it may as well be. Like many women, Foy knows all too well what it's like to feel torn between the demands of motherhood and the demands of work obligations, and it's a dilemma that can ultimately be avoided in most cases. Women who return to work while still breastfeeding their children deserve to be supported, instead of being left to feel like they've failed both themselves and their infants. And that really shouldn't be an issue in need of debate.