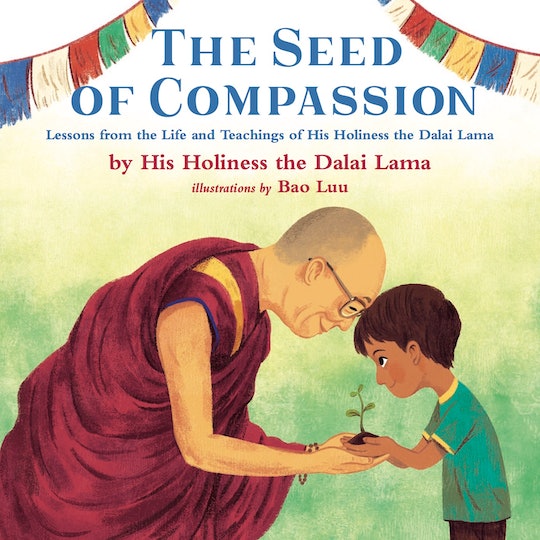 Sometimes when I feel like the world keeps getting more and more depressing, there’s a little glimmer of hope that makes me smile, like the Dalai Lama's children’s book being released March 24, 2020. The Nobel Peace Prize Laureate His Holiness the Dalai Lama has teamed up with Kokila, “an imprint of Penguin Young Readers,” and Vietnamese illustrator Bao Luu to create a beautiful piece of children’s literature — The Seed of Compassion: Lessons from the Life and Teachings of His Holiness the Dalai Lama. Even the title alone gives me a bit of hope.

Tenzin Gyatso is the 14th and current Dalai Lama and he was awarded the peace prize in 1989 and the U.S. Congressional Gold Medal in 2007, according to the book's press release. "He has been a passionate advocate for a secular universal approach to cultivating fundamental human values ... travels extensively, promoting kindness and compassion, interfaith understanding, respect for the environment, and, above all, world peace," the press release noted. So it makes sense that in this children's book of his, he speaks directly to the children reading it.

His goal with this book is to inspire children to "create a world that embraces all of humanity with an open heart," through stories of his childhood and lessons he learned by training to be a Buddhist monk. "His Holiness encourages children and families to nurture the seed of compassion that lives within them," the press release reads. In the book, the Dalai Lama says, "We cannot change the past, but the future we can change ... And children already have the tools needed to build a happier world, a better world, a compassionate world.” He also teaches that empathy and peace are gifts and are "vital to a healthy society." So true.

It also makes perfect sense that the Dalai Lama is working with publishing company Kokila. They try to provide an inclusive community of authors, and have stories written about anyone and everyone in books for young children and young adults. And inclusivity and togetherness are definitely up the Dalai Lama's alley, especially since his latest book is a direct advocate for teaching children kindness.

The book is available for preorder on Amazon for $18.99, and is appropriate for children ages 4 to 8 years old — but I think many, many adults would benefit from reading the Dalai Lama's words in this story (and in general), too.

In the story, the first person to teach the Dalai Lama about compassion was his mother, and I think that makes an important point about how it's up to us as parents to make sure we teach our children empathy and compassion from a young age, too. And it can start from reading this book to our kids and "planting the seed." Who knows, maybe we will inspire our kids to become compassionate and kind leaders, or at least the kid who stands up to bullies on the playground and befriends the "different" kids at school. We definitely need more of that these days.