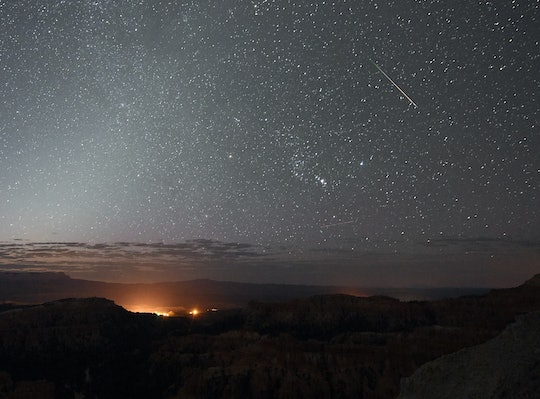 Legend has it that wishing on a shooting star will make your wish come true. If that's the case, get your wishes list lined up because you're about to see a bunch of them. Until late August, if you have access to clear skies, you've got a front row seat to a truly ethereal light show. Grab a comfy blanket or some lawn chairs, because here's how to watch the Delta Aquariids meteor shower.

First, a bit of background. Meteors are actually pieces of debris left behind from comets soaring through the solar system. As the Earth orbits the sun and encounters these pieces of debris, "rocky bits slam into our atmosphere and burn up, creating a spectacular display in the night sky," according to National Geographic. Certain areas of Earth's orbit are more cluttered with these leftover comet particles than others, which is why we are treated to meteor showers at certain times of the year.

The Delta Aquariids are meteors, and the "long and rambling Delta Aquariid shower" is active from July 12 until August 23 annually, according to EarthSky. That's right: You can spot these faint meteors for over a month. However, there is certainly a peak time when the shower will be most vibrant, and it's right around the corner. The shower is expected to peak this weekend, specifically during the early morning hours of Sunday, July 28. Set your alarms for a super early wake-up, or pencil it into your night owl festivities if you're cooler than I am, and take advantage of this once-a-year display.

The Delta Aquariids are most visible in the Southern hemisphere and southern latitudes of the Northern hemisphere, according to NASA, but there are a few pointers for picking a prime viewing spot no matter where you're located. Try to find a place with minimal light pollution, outside of city limits and away from street lights. Then, get comfortable. "Come prepared with a sleeping bag, blanket or lawn chair. Lie flat on your back and look up, taking in as much of the sky as possible," instructed NASA. "In less than 30 minutes in the dark, your eyes will adapt and you will begin to see meteors."

If this is your first time experiencing the Delta Aquariids shower, you picked an excellent year. In previous years, light from the moon has made the meteors difficult, or nearly impossible, to spot. This year, "the moon will be in a waning crescent during the shower, which should ensure dark enough skies if you’re far enough away from a city," reported Vox.

And if the Delta Aquariids wind up getting you hooked on meteor showers, you can continue the party with the famous Perseid meteor shower in mid-August. Unfortunately, the moon won't be fully cooperative for that shower, meaning the meteors will be "washed out by a close-to-full moon during their peak," according to Space.com. They won't be quite as magnificent as other years but you'll likely still be able to spot a few.

So round up a crew, dust off your favorite picnic blanket, and try to get a few extra hours of sleep before this weekend. The Delta Aquariid meteor shower is sure to be a sight, whether you're an armchair astronomer or simply want an excuse to throw a meteor-watching party.