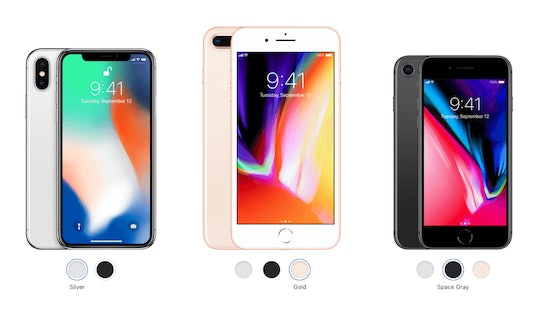 The iPhone 8 and iPhone 8 Plus are natural extensions of the iPhone product line that we've come to know over the last 10 years. They're similar in both shape, size, and design as the iPhone 7 and iPhone 7 Plus, but offer a number of upgrades to both hardware and software.

Perhaps the biggest difference between the iPhone 8 and iPhone X is the screen. The iPhone X features an edge-to-edge glass OLED display and completely does away with the Home button. It's a pretty big shift in terms of the design and aesthetic that iPhone users and fans have come to appreciate over the years, but it's definitely indicative of the design evolution that's been happening to smartphones over the last few years.

The iPhone X and iPhone 8 Plus will also feature "Portrait Mode," which the iPhone 8 will not have. Portrait Mode uses the iPhone's powerful AI to create dramatic lighting effects that are normally achieved in studio settings, but is done on the iPhone with just the touch of a button. It's pretty ridiculous just how incredible the facial recognition technology is on the iPhone X that it allows users to be able to make such drastic manipulations to lighting without doing anything than just swiping through a few settings. Oh, and about the whole "facial recognition" feature...

Face ID is kind of insane. It's facial recognition software that's only available on the iPhone X, which means you can unlock your phone just by looking at it. You can make payments with Apple Pay just by looking at it. This is a MAJOR game changer in the realm of personal smartphone security and technology. Face ID is not available on the iPhone 8 or iPhone 8 Plus, but you can be it's going to become an essential feature in future models of the product line.

There's definitely a lot for iPhone fans to unpack as they decide on which of the new iPhones to spend their money. Going from the iPhone 8 or 8 Plus to the iPhone X is a pretty big jump in price — but if the iPhone X specs and features can live up to the hype, it'll definitely be worth it.