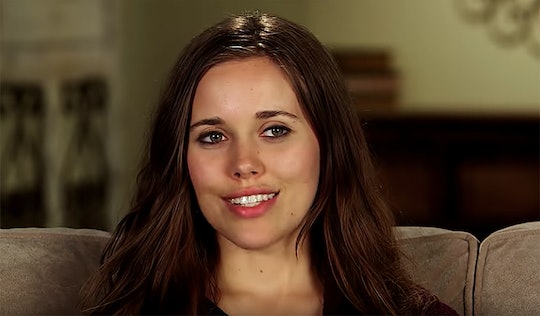 All The Pregnant Duggars Posed For The Ultimate Bump Photo

Just days after Jessa Duggar gave birth to her third child, a girl named Ivy Jane, the rumored Duggar maternity shoot surfaced on Instagram. Although some fans were a bit concerned that it wasn't going to happen because Jessa gave birth early (her due date was June 5), it looks like the pregnant Duggar ladies managed to sneak in a photo-op a month or so before Ivy's arrival. What's especially interesting about the pic? It clears up any lingering speculation that other Duggars are secretly pregnant at the moment.

A few weeks ago, Jessa told a fan on Instagram that a Duggar maternity shoot, featuring herself and four pregnant sisters (Anna, Kendra, Joy-Anna, and Lauren), was in the works.

"We are actually planning a sisters’ photo shoot with all 5 of us due this year!!!" Jessa told the curious commenter. "Hope I don’t go early and miss out."

It turns out that Jessa did go early, however, delivering Ivy on May 26. "We were getting ready for church when my water broke, and we were thinking ‘Well, I guess we have a change of plans!" Jessa revealed on the family's blog. "Her due date was June 5th, and since both of our boys went five days past their due date, we thought we would go late again. We were so surprised when she came two weeks earlier than her brothers."

Given Ivy's early arrival, it's fair to assume that the planned maternity shoot didn't happen. Although it's not clear if the pregnant sisters were able to hold a professional shoot before Jessa went into labor, they did manage to take a casual snap on Easter.

"#Throwback to Easter Sunday when the five pregnant Duggar sisters got our first group picture together!" Anna captioned the sweet shared to Instagram Thursday.

Anna also confirmed the due dates in order, stating that Kendra is due next, followed by Joy and Lauren. Anna is due last.

The adorable photo inspired fans to leave congratulatory messages for the crew, while others shared their own personal anecdotes.

"It's so exciting to have so many babies around, I remember being pregnant at the same time as my cousin & sister in law 19 years ago," one person commented.

Someone else said: "Those little cousins are going to have so much fun together!! CONGRATS to all!"

Another fan added: "I think that is the coolest thing that ALL of them are pregnant together and all these beautiful babies will be born back to back."

Kind comments aside, I think it's important to point out that another Duggar pregnancy announcement probably won't happen for another few months, at the minimum. If another Duggar sister was pregnant, it's likely she would have been included in this shoot. It's possible, however, that Texas-based Jinger is pregnant but that she couldn't make it due to distance. Or maybe the Duggars are trying to throw fans off the scent. You never know.

Either way, this maternity shoot is a sweet reminder that the impending Duggar cousins will have built-in best friends to play with as they grow up. Too cute.