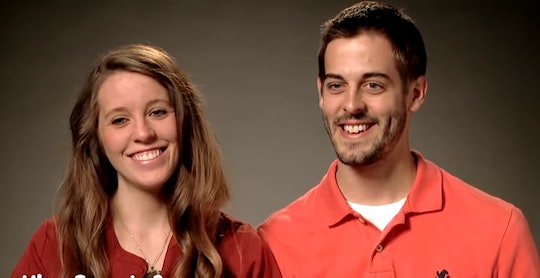 It's hard to imagine a member of the massive Duggar clan being considered too controversial for the rest of the family. I mean, they seem to have forgiven Jinger for wearing pants and everything, right? One new member of the family has apparently crossed the line with his controversial comments on social media. The Duggars reportedly aren't happy about Derick's Twitter presence in the wake of his comments about fellow TLC star Jazz Jennings.

Jill Duggar's husband Derick faced a massive backlash on Nov. 9 after he took to Twitter to say he "pitied" transgender reality star Jazz Jennings, and that he felt she was being "used" by her parents (although in Derick's tweet, he refused to refer to Jazz as a woman, continually referring to her as "he"). While the Duggar clan has seen more than its fair share of controversy in the past, including serious allegations against of sexual misconduct against eldest son Josh Duggar, one source told Radar Online that the family is not too impressed with the Twitter storm Derick unleashed with his comments. Perhaps especially because both Counting On, the reality series that features the Duggar sisters (including Derick's wife Jill), is on the same network as I Am Jazz.

The TLC network was pretty quick to distance itself from Derick's tweet about Jazz, noting that he was no longer part of Counting On and the network had no plans to work with him in the future. The statement also acknowledged that "TLC is proud to share the story of Jazz Jennings and her family and will continue to do so."

This isn't the first time Derick has come out against the young reality star; Derick tweeted in August about I Am Jazz, calling the show an "oxymoron" because the show is, in his opinion, a "reality show about a non-reality." He went on to write that "Transgender is a myth. Gender is not fluid; it is ordained by God."

Derick's continual Twitter feud with a teenage girl has apparently caused a rift in the tight-knit Duggar family. Derick, who shares 2-year-old son Israel and 4-month-old son Samuel with wife Jill, has not been featured on the family's official Facebook page since the beginning of August. All of the other sister's husbands (Jessa's husband Ben Seewald, Jinger's husband Jeremy Vuolo, and Joy Anna's husband Austin Forsyth) have been features, as has Jill and the children. But no Derick. And when son Joseph Duggar married Kendra Caldwell in September, all of the husbands were seated behind Michelle and Jim Bob Duggar; Derick was seated on the other side of the church.

A source close to the family told Radar Online that wife Jill is trying to be supportive of her husband, not everyone feels the same pull to defend Derick.

There’s a lot of outrage between increasingly divided factions.

The source went on to say that Derick himself is really upset about the situation:

Derick is really having a hard time. They are extremely careful to not criticize each other. He wasn’t trying to hurt Jazz. She just conflicted with his belief system and he reacted without thinking it through.

Whether or not there is a rift in the Duggar family over Derick's hurtful comments about Jazz, one thing is certain; the young teen herself is handling the situation with wisdom and grace beyond her years. Her response to Derick's tweet?

Perhaps Derick could learn a little something about responding to people whose belief system differs from yours from this 17-year-old girl. A young person who has had to fight to be who she is in ways Derick might not be able to comprehend, and still responds to negative comments with love.