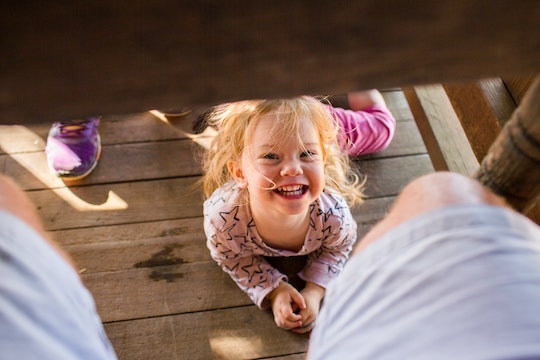 It's Felt Like 'Summer Vacation' Since March — Now What?

Here we are, Fourth of July weekend — the real start of summer! And as I rifle through a cabinet looking for some sparklers for my son to light, I discover the box empty, save for the remains of a single, blackened stick. Because we lit all the sparklers back in May, out of boredom.

Let's be real: in pandemic days, it's already felt like summer for ages. So what the heck are we supposed to do now?

Summer would normally be a time when parents enjoy the extra hours with their kids, engaging in all kinds of summery fun, like crawling around with sidewalk chalk and prancing through the sprinklers. But this year, after months of no school, most of us feel like that one singed sparkler left in the box — completely, utterly burnt out.

The sidewalks have been thoroughly chalked. The sprinklers have rendered the yard a mud pit worthy of a monster truck rally. And as we survey the wreckage of a perpetual "vacation" that already happened months too soon, headlines pop up on our phones that make our already sweaty palms even sweatier. Headlines that read: "Will Schools Re-Open in September?"

We are caught in an endless summer. And it's funny to think that those words actually used to hold great appeal. The idea of an "endless summer" used to conjure blissed out, tranquil images. Things like holding a daiquiri while your legs dangle over a dock, a cool breeze blowing your hair — hair that had been cut and colored within the last five months by an actual hairdresser — and lazy afternoons inside the air conditioned nirvana that is a movie theater.

But now the words "endless summer" only summon the image of a bored, demanding child standing before us, saying no, he doesn't want to make any more homemade slime, or slide day-old melon balls onto skewers to craft rainbow fruit kabobs. What he wants is a bowl of Lucky Charms and the iPad.

We are caught in an endless summer.

And of course, the news every morning is as endlessly bad as our endless summer. It's all dust storms and death, and wild-eyed white women standing in 7-Elevens screaming because they've been asked to wear a face mask while they purchase their Coke Zero. The news alone makes the words "endless summer" now sound like one of the rings of Dante's inferno. Except hotter. Because there are no inflatable pools available for purchase anywhere within the Milky Way.

Nor can we fill our endless days with normal summertime activities. Most pools are still closed, and a crowded beach feels akin to taking your small child cliff-diving. (Maybe it will be OK. Maybe it won't.) And if your kid wants to go scoot around the block with some buddies? Well, make sure they keep those Micros 6 feet apart. The other day I actually spent several minutes brainstorming how one could perhaps play "Duck Duck Goose" without actually touching. (Could they use one of those toy robot claws? A wooden spoon?) It was a thought experiment that resulted in me opening a beer at noon.

Now, as I stand outside with the bright neon dots of 300 exploded Bunch-o-Balloons water balloons scattered at my feet (balloons that were exploded by a single child, in under 20 minutes), I find I am gripped with a combination of both lethargy and panic. The feeling slides around inside me like the DIY lava lamp on Pinterest I can no longer muster the energy to make. What to do in the days ahead? How to fill the endless hours?

The scenes families are setting now, where their kids zone out in front of a screen and every now and then a parent leans around the door to shout halfheartedly, "go outside and play," sounds quite similar to my own childhood summers.

The one comfort is that I know I am not alone. Everywhere are articles and stories of parents just "throwing in the towel" or "giving up." Though I have realized with some amusement that the "giving up" that is often described — scenes where parents let their kids zone out in front of a screen and every now and then lean around the door and shout halfheartedly, "go outside and play" — sounds quite similar to my own childhood summers. In one hazy moment, I briefly wondered if maybe we modern day parents just have a branding problem? Like maybe we just need to rebrand the idea of "giving up" as "adopting the more relaxed parenting methodologies of the Reagan-era?"

But no. That is not us. And we know it. We are the makers-of-homemade-slime parents. The sidewalk-chalk-mosaic parents. The fruit-and-veggie-snack-built-into-a-rainbow parents. And we must reach within us to find the strength and the will to say no. No our child cannot and will not watch 10 hours of YouTube videos featuring a child he does not know unboxing various plastic toys.

So what to do? Well, lately I've found myself thinking a lot about Laura Ingalls Wilder, and what she would do. Sort of a W.W.L.I.W.D. strategy. Yes, this does apply to seeking out simpler activities. (My son and I did spend one entire afternoon on the floor of the closet making shadow puppets. And yes, it was one of the longest afternoons of my life. But I do believe he enjoyed it.)

But more than activity ideas, I am trying to take on a Wilder world-view. One thing I doubt Wilder would do is complain. Or feel sorry for herself. Or fantasize about breaking an iPad with a hammer. (Mainly because she would regard an iPad as an object from space and the whole town would likely form a religion around the all-knowing goddess Siri. But still.)

What I do think Wilder would do is be resilient. She would get up every day, and accept that the day was probably going to be hard, and the barn-raising may be a sh*t-show, but she would get through it, and then she would get through the next day, too. Wilder once said, "It is still best to be honest and truthful; to make the most of what we have; to be happy with simple pleasures; and have courage when things go wrong.”

I think of this as I pluck up t``he tiny water balloon pieces, and try to come up with what to do next — how to fill the endless hours. And I remind myself: Simple pleasures. And courage. And yes, some iPad.