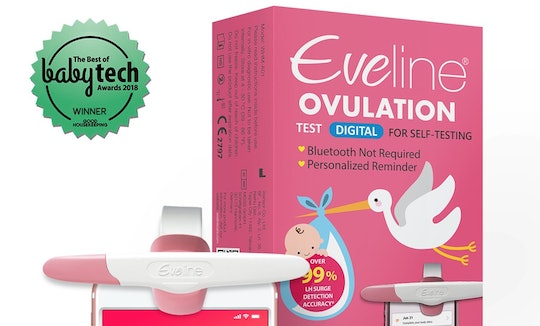 Your phone is smart enough to order food, track your period, count your steps, and keep track of your busy schedule, so it should come as no surprise that it can be a powerful tool when you're TTC: Eveline's fertility and cycle tracker app features an ovulation test that links with your smartphone for quick, convenient, and accurate results.

Yes, your techiest friend will love this, but even if you’re not the most tech-savvy person around (hello, it’s me, the person who lives in a perpetual state of confusion about how to work Bluetooth) you’ll likely find Eveline straightforward and easy to use. In addition to detecting when you're at "peak fertility," the app sends push messages reminding you to take the test, texts your partner relaying the good news, and helps you track and plan your next ovulation cycle so you know when you have the best chance of conceiving. It's the little TTC wizard you didn't know you needed.

So, exactly how does it work? The Eveline Smart Fertility System is an ovulation testing and tracking system that works with the smartphone (Android or iPhone) to predict your ovulation dates. "It utilizes the smartphone's front camera to read the results from test strips with 99 percent accuracy and its monitoring app shows and records test results on automatically for maximum convenience,” a spokesperson for the company tells Romper in an email.

For starters, you'll download the app and make your account by answering some questions about yourself (age, BMI etc.) and about your period. Once you've filled this out as accurately as possible, you're ready to begin testing. The kit comes with a separate test attachment that looks almost identical to a pregnancy test and a clip to slide onto your phone (the clip is reusable, however, you'll need a new test strip each time you test).

Remove the cap and either pee directly on the white absorbent tip of the stick for five seconds, or you can pee in a clean cup and hold the test in the liquid for at least 15 seconds.

Red lines will appear in a window on the results window in five to ten minutes, after which you can pop off the plastic protective cap, and attach the test to the holder clip which clicks easily over your phone’s camera. The screen will turn green when it's in the right spot. I’ll admit I was skeptical when seeing this, but no pee will touch your phone, I promise. Your phone camera will analyze the data and tell you within seconds if it's an ideal time for you to conceive.

The app tracks your luteinizing hormone (LH), which is responsible for triggering ovulation. Many women are taught that their cycles are 28 days long, with ovulation occurring around day 14. This would be convenient, especially when trying to conceive, but the reality is that the length of each individual's ovulation cycle varies widely.

"An LH surge can last from hours up to days, with ovulation occurring roughly 24 hours after the surge begins. Since the optimal time for conception is the five-day window leading up to ovulation and the day of ovulation, it’s important to pinpoint when this surge will begin and plan ahead," per the Eveline website. This means that the app gets more reliable with time, as it learns to predict your ovulation cycle. The company recommends remaining consistent with the app for at least three to six months. You may also want to consider using it in the months before you want to become pregnant, so it starts to learn your typical cycle; this is especially true if you've recently stopped taking the pill, which the website says can throw off your cycle for about two months after.

You don't even have to text your partner to tell them it's time to get freaky; the app will do that for you too by giving you the option to share your results directly. It also has a built-in calendar which tracks your period, your peak fertile days, and gives you the option to indicate whether or not you had intercourse on those days, which is good because no one wants to keep track of their sex-life on a shared Google cal.