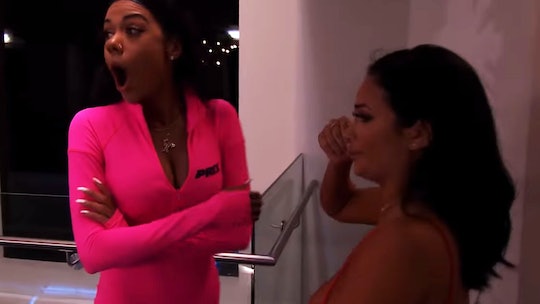 Yup, The 'Ex On The Beach' Season 3 Cast Will Charm Their Way Into Your Heart

Ex on the Beach is back for its third season, and you'll never guess who is about to wash up on shore. Starting on Tuesday, Jul. 16, host Romeo Miller returns with ten reality TV veterans who are hoping to find another shot at love. That is, if they aren't derailed by their exes. So who is in the Ex on the Beach cast? Season 3 is heating up and there are no signs that the MTV reality series will cool down anytime soon.

For those of you who don't know how Ex on the Beach works, the show puts a group of celebrity singles in Malibu. While they're there to put their hearts on the line, their exes arrive to spark up an old flame or get their revenge by starting a new romance with someone else. Of course, since there are already established histories entangled with every star, there is plenty of drama that goes down from week to week.

It looks like Season 3 of Ex on the Beach will not disappoint, as the new season headlines exes like Marie Roda from The Challenge and The Real World, Anthony Bartolotte from Are You the One? and The Challenge, Elena Davies from Big Brother, and Are You the One? alums Tevin Grant, Anthony Martin, and Shannon Duffy. The "exes" cast lineup also includes a number of new faces like Lisa ‘Thai” Coffey, Ariana Nova, Alexis McNeal, Cara Cooper, Kellie Sweet, Emily Arreseigor, Danielle Clarke, Max-Davis Kurtzman, Jason Walsh, Tyler Garrigus.

Clearly, fans of Season 3 of Ex on the Beach are already guaranteed a good time. Now, let's dive into the celebrity singles, and trust me when I tell you you're in for a treat.