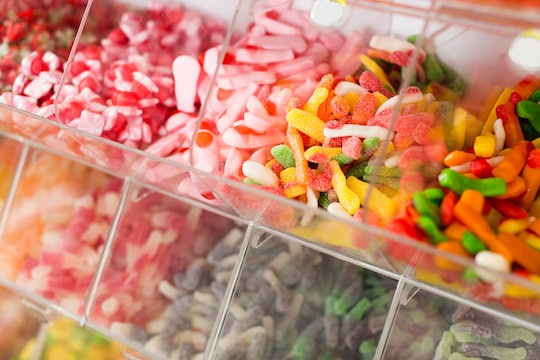 I think it's safe to say that most parents truly value information. We like to stay on top of what's going on in the world and we like to know what sort of food and drink we're feeding our kids and putting into our bodies. That's why you'll find so many of us standing in grocery aisles reading box labels intensely. Unfortunately, it seems as though some nasty stuff has slipped through the cracks despite our best efforts. A total of seven artificial flavors have been banned by the FDA because they could possibly cause cancer, and here's the kicker: most of the time they are simply listed under the broad spectrum of "artificial flavors."

CNN reported earlier this week that the US Food and Drug Administration has decided to revoke seven different artificial additives most commonly used to simulate citrus, mint, and cinnamon flavors in things like ice cream, baked goods, and candy. This decision was based on findings collected by environmentalists and food safety experts that these seven artificial flavors caused cancer when ingested by laboratory animals. While one of the named substances, styrene, is no longer used by manufacturers, the others are still used in small doses to this day: benzophenone, ethyl acrylate, eugenyl methyl ether, myrcene, pulegone, and pyridine.

These chemicals were initially considered to be safe for human consumption by the FDA in 1964, as per CNN, but of course there has been considerable scientific developments since then. And this isn't the first time these additives were considered a serious cause for concern, either; back in 2016, a petition to remove all of these potential carcinogenic flavors was put in front of the FDA.

Now that the FDA has research from several different environmental and food safety groups all concurring that these artificial substitutes could cause cancer, not to mention two separate petitions against them, the administration released a statement acknowledging it would be banning the aforementioned artificial flavors. But as Forbes reports, the FDA wants to reassure the public that these substances are only used in small doses that do not pose a serious health risk:

While the FDA’s recent exposure assessment of these substances does not indicate that they pose a risk to public health under the conditions of their intended use, the petitioners provided evidence that these substances caused cancer in animals who were exposed to much higher doses.

One of these artificial flavors, benzophenone, was linked by scientists to leukemia in lab rats as well as liver and kidney problems.

Manufacturers who are using these additives have two years to ensure they are removed from their products, and the FDA recommends they use natural mint, citrus, and cinnamon flavors while trying to come up with a safe artificial alternative.

In the meantime, consumers should be extra careful when it comes to checking the ingredients listed on their products of choice. Because just seeing the phrase "artificial flavors" is clearly not acceptable any longer.