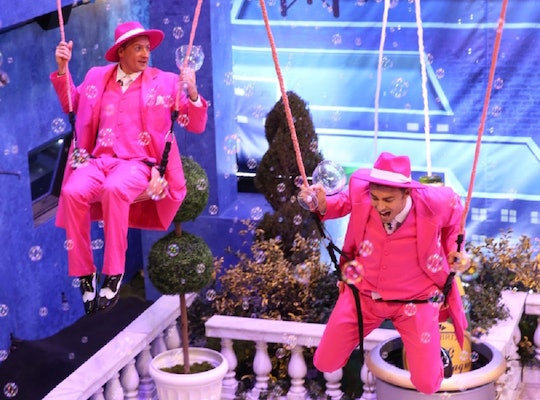 The second season of Celebrity Big Brother is here and it’s everything you want it to be. There’s plenty of side-eyeing, backstabbing, and just general teasing going on (especially where Tom Green is concerned), meaning this is going to be a very entertaining season. In the premiere episode alone, there was a cutthroat competition which has resulted in the first Head of Household (HOH). So who is it? Who wins HOH first on Celebrity Big Brother this season? Well, it’s between two contenders.

Right out of the gate, following first impressions (which were... interesting, to say the least), the housemates were sent directly into competition to compete for HOH. Not everybody participated, though most did. Only Kato Kaelin (best known for speaking as a witness during O.J. Simpson’s infamous trial) and former WWE wrestler Eva Marie sat it out. The competition was, as to be expected, kind of strange, and required the contestants to dress up in technicolor 1920s evening wear, which was more ridiculous than what I wore as a member of the chorus in a middle school production of Guys and Dolls.

The winning team, swimmer Ryan Lochte and Mean Girls actor Jonathan Bennett, managed to swing the fastest while holding cups of champagne (you know, for a ~classy~ effect), but then were rendered (practically) speechless by this turn of events:

For clarification: Ryan and Jonathan will compete in Episode 2 and whichever one wins is HOH. But — and this is a pretty big but — the one that loses is now potentially up on the chopping block for elimination. Since these two clearly have different strengths, it absolutely depends on what kind of obstacles they’re challenged with this time around. So we know that Ryan has anything involving swimming on lock, but that seems unlikely to come up right away. And what does Jonathan have that sets him apart, aside from his gig hosting Cupcake Wars?

Turning to the fans, and seems like attention is pretty split all around. Those on #TeamJonathan are all about the Mean Girls quotes. It’s like that movie never gets old.

Yet somehow there’s still no word on whether Dina Lohan and Jonathan are ever going to get into their connection, though this screenshot sort of says it all.

As for #TeamRyan (actually, it feels weird to call him that, let’s go with #TeamLochte), the world seems to have forgotten about his catchphrase (“Chyeah”) and that whole thing where he lied about being robbed during the 2016 Olympic Games in Rio. I guess his recent stint in a treatment center pushes that out of mind? Or maybe he just gives off a general aura that some really like... and others really don't.

Or maybe it’s his lack of pop culture knowledge.

Honestly, it feels like it could still be anyone’s game at this point: The Dudebro Athlete or The (Overly) Nice Guy. Guess you’ll have to tune in to find out who becomes the first HOH.